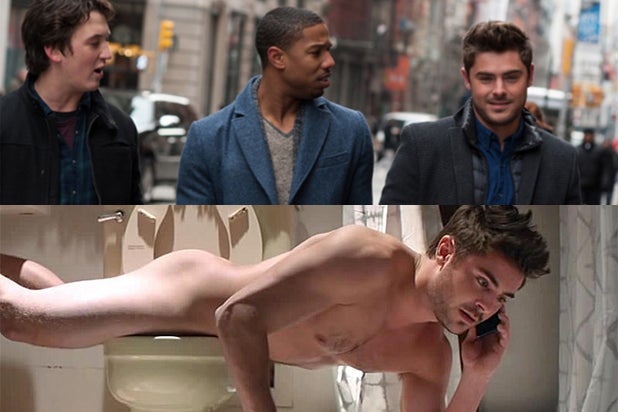 The thrill has been mostly gone for romantic comedies since Meg Ryan’s heyday.

Once the playground for Tracy and Hepburn, Nora Ephron, Woody Allen, Preston Sturges and Julia Roberts, the genre has lost its fizz, thanks to joyless rom-com duds such as “Fool’s Gold,” “New Year’s Eve” and “Did You Hear About the Morgans?.”

Movies such as “No Strings Attached” and “Friends With Benefits” fumbled when they tried to injecting sex into the stale genre; though bromances disguised as romantic comedies such as “Knocked Up” managed to find the box office success that has eluded traditional romantic comedies.

Enter “That Awkward Moment.” The Zac Efron romantic comedy turns the usual romantic comedy plotline upside down: Instead of a woman on the prowl for Mr. Right, the man is seeking Mrs. Right.

“Guys want relationships too,” Tom Gormican, the film’s writer and director, told TheWrap. “The classic idea that its a girl who wants a relationship and won’t feel complete until she has one is so antiquated. Guys lean on their friends for advice, they obsess over whether or not to send a text and if something is casual or not.”

“That Awkward Moment,” opening Friday, centers on two twenty-somethings (Efron and Miles Teller) who swear off relationships in a sign of solidarity after their buddy (Michael B. Jordan) endures a painful breakup. In true romantic comedy fashion, it’s a vow that proves hard to keep.

Gormican based the film in his own experiences dating in New York City. By grounding his “meet cute” scenes in an underlying reality, he argues he can spice up romantic comedies again.

That’s a tall order. As Atlantic critic Christopher Orr noted in a 2013 evisceration of the genre, entitled “Why Are Romantic Comedies So Bad?,” part of what doomed these films is that old obstacles to romance no longer exist. “Love is increasingly presumed–perhaps in Hollywood most of all–to transcend class, profession, faith, age, race, gender, and (on occasion) marital status,” Orr wrote.

Also read: ‘That Awkward Moment’ Review: All the Man-Child Rom-Com Clichés, Plus a Nearly-Nude Zac Efron

Other critics point out that recent films such as “The Ugly Truth” and “Killers” both of them starring Katherine Heigl, have lacked spark.

“They’ve been dreadful,” Glenn Kenny, a film critic for RogerEbert.com, said. “They’ve hewed to a standard formula where two people hate each other, but are meant to be together. In an attempt to make it contemporary sometimes they’ve become aggressively vulgar, but that’s left them with no room for genuine emotion or anything resembling sweetness.”

“It felt like there were no stakes left, so the complications became really out there,” Gormican said. “It was, oh no she’s an agoraphobe and he’s a mountain bike instructor, but they can’t get together because she never wants to go outside. That is not a thing I recognize in life. So I think the story needs to become more internal and the complications have to involve lower, more realistic stakes.”

Studios fell out of love with romantic comedies for other business reasons.

“The business of studios now is to build properties into franchises,” “Sleepless in Seattle” producer Lynda Obst told TheWrap last summer while promoting her book “Sleepless in Hollywood.” “That’s why they don’t want to do romantic comedies any more. They’re one-offs. There’s a cap on how much money you can make. What are you going to do after happily ever after? The divorce? The affair?”

While “My Best Friend’s Wedding” and “Hitch” were some of the biggest hits of the late ’90s and early aughts, later films such as “The Back-Up Plan,” “The Five-Year Engagement” and “How Do You Know”flopped badly or barely broke even.

Moreover, the hottest romantic comedy stars such as Matthew McConaughey, Reese Witherspoon, Julia Roberts and Sandra Bullock have moved on to weightier roles in serious dramas. Indeed, McConaughey’s time spent falling for Kate Hudson in “How to Lose a Guy in 10 Days” and “Fool’s Gold” are treated as black marks on the resume, a period in the wilderness before he  re-emerged with Oscar-bait roles in the likes of “Dallas Buyers Club.”

Judd Apatow injected a stoner, pop-culture obsessed vibe into boy meets girl films such as “Knocked Up” and “The 40 Year Old Virgin,” but he appears to have largely abandoned bromance infused romantic comedies. His more recent pictures such as “This Is 40” and “Funny People” were more interested in jaundiced dissections of marriage and family with barely a whiff of romance about them.

Film critic and historian Leonard Maltin believes there’s still hope for the genre in this jaded sexting age. He points to recent French films such as “Paradise” with Audrey Tautou and “Heartbreaker” with Vanessa Paradis as evidence that romance is alive and well on the big screen.

“Romantic comedies are not irrelevant,” Maltin said. “They just require a lightness of touch that’s hard to achieve. You have to break through this barrier of cynicism and irony.”

In other words, there’s a reason French is still the language of love.