Any movie with an opening sequence featuring a close-up of an elephant’s anus spraying diarrhea on hapless bystanders is certainly announcing itself as something, and by the end of the three hours and eight minutes of Damien Chazelle’s “Babylon,” viewers will have been exposed to any number of bodily secretions, including urine, vomit and tears.

The tears come at the film’s climax, no doubt in the hopes that the audience will follow suit, but of all the aforementioned emittances, they feel the least organic to this bloated, hyperbolized and ultimately dreary extravaganza of decadence and nostalgia.

Both a valentine and a poison-pen letter to the American film industry in its infancy, “Babylon” aspires to the grandiosity of “The Last Tycoon” and “The Day of the Locust,” though it more often recalls Ryan Murphy’s embarrassing and wildly ahistorical “Hollywood” miniseries. 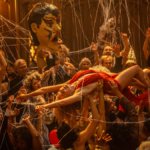 The film opens with a seemingly endless Hollywood party – it’s the 1920s, and Bel Air is still a nondescript, undeveloped hillside – where we will meet most of the major players: Hero and audience surrogate Manuel Torres (Diego Calva, “Narcos: Mexico”), one of the unfortunate handlers of the incontinent pachyderm, has dreams and ambitions in the nascent film industry. Screen king Jack Conrad (Brad Pitt) loves women and booze, not necessarily in that order. Aspiring starlet Nellie LaRoy (Margot Robbie) won’t stop until her name is up in lights. And observing everything with an arched brow is screenwriter and gossip columnist Elinor St. John (Jean Smart).

(We also meet the film’s two other major characters of color – Black jazz musician Sidney Powell (Jovan Adepo, HBO’s “Watchmen”) and lesbian Chinese-American chanteuse Lady Fay Zhu (Li Jun Li, “Sex/Life”) – but while they pop up periodically throughout, neither gets much of a throughline of their own.)

Nellie crashes the party and subsequently inhales a great deal of cocaine with Manuel; they proceed to have a very lengthy conversation about their dreams and ambitions, and we’re meant to understand that this is the moment where Manuel falls hopelessly in love with Nellie. The scene is a realistic portrayal of two people on coke speaking to each other with great insistence and enthusiasm about absolutely nothing, but it’s also a metaphor for “Babylon” — it’s a hyped-up cocaine conversation of a movie, throwing out lots of ideas and images and mammoth set pieces without ever amounting to anything.

Over the course of the story, the talkies come in and upend everything, and it’s telling that the film’s best sequences — Nellie and crew enduring take after take to get one sound scene captured on film, Jack’s wooden delivery of dialogue — feel like a mean-spirited rip-off of “Singin’ in the Rain.” (“Babylon” commits a further assault on the memory of “Singin’,” but it’s impossible to describe without getting into spoiler territory.) Manuel (now “Manny”) works his way up to being a studio executive, but not even he can rescue Nellie from her own self-destructiveness, especially after she pukes all over William Randolph Hearst (played by Pat Skipper).

Manny’s final attempt to save a debt-plagued Nellie involves accompanying a gangster (a twitchy Tobey Maguire) to a creepy, literally underground party that’s supposed to be the antithesis of the opening bacchanal. Through Chazelle’s eyes, unfortunately, one wild party might represent good decadence, and the other one bad, but they’re both grotesquely uninvolving. (Not to mention that the live-wire tension in all the Maguire scenes feels directly borrowed from the Alfred Molina sequence of “Boogie Nights.”)

For all of the lathered-up fervor on display — from Linus Sandgren’s restless camerawork to Tom Cross’ frenetic editing to Justin Hurwitz’s insistent jazz score — “Babylon” works only in the rare moments when it slows down enough to capture a human moment like Elinor giving a falling star the bad news (his career is over) and the good news (thanks to the magic of the movies, he will live forever), or when Sidney contemplates the humiliating demand that he wear burnt-cork makeup to darken his skin on film. These fleeting moments of powerful emotion serve only to underscore the overblown tedium of the rest of the movie.

“Babylon” ends with a miscalculated montage that captures the history of the moving image from Mélies to Godard and “The Matrix,” as though Chazelle fancied himself the movies’ last auteur, turning off the lights on his way out of Hollywood. The cinema has endured through two world wars and the advent of television and the internet, and it will continue to thrive in one form or another. It will even, thank goodness, survive “Babylon.”

“Babylon” opens in US theaters Dec. 23 via Paramount.