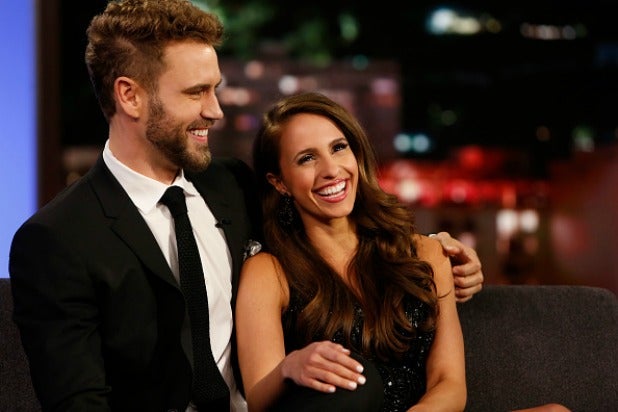 The fourth time was apparently not the charm for “Bachelor” franchise mainstay Nick Viall.

Viall and Vanessa Grimaldi, who got engaged during the “Bachelor” Season 21 finale that aired in March, have called off their engagement, with the pair announcing the bad news.

“It’s with a great amount of heartbreak for the both us as we have decided to end our engagement. We gave this relationship our all and we are saddened that we did not get the fairytale ending we hoped for,” Viall and Grimaldi said in a joint statement Friday. “We will continue to be there for each other no matter what.”

“This hasn’t been an easy decision, however,” they continued. “As we part ways, we do so with lots of love and admiration for each other.”

Viall has been a polarizing figure on the ABC dating franchise since butting heads with his “Bachelorette” Season 10 co-stars in 2014 before ending up as the runner-up to Josh Murray for Andi Dorfman’s affections. Viall was accused of slut-shaming Dorfman during the “After the Final Rose” special after he asked her why she had sex with him if she wasn’t in love with him.

Viall, a contestant on “Dancing With the Stars” Season 24 earlier this year, returned to “Bachelorette” in 2015 for Kaitlyn Bristowe’s season, where he landed in second place behind Shawn Booth. He took part in “Bachelor in Paradise” Season 3 last summer but did not end up in a relationship.

Also Read: Why the Next 'Bachelor' Star Definitely Won't Be Peter Kraus

Fans took to Twitter on Friday to react to the split, with many people not appearing to be particularly stunned that things are over for the couple, who spoke openly about turbulence in their relationship during their “After the Final Rose.”

This follows “Bachelor” Season 20 couple Ben Higgins and Lauren Bushnell calling off their engagement in May.

Check out an array of messages below.

Everyone in #BachelorNation when they hear the Nick and Vanessa are over. #TheBachelor pic.twitter.com/kfRV5lL4Sr

I truly only wish the worst for Nick and Vanessa during this trying time. pic.twitter.com/t6mjdmue5w

*everyone pretending to be shocked that Vanessa and Nick broke up* #TheBachelor pic.twitter.com/segSMmEWE6

Nick and Vanessa have broken up…ABC, please don't even think about giving him another chance. Thank you.

when i found out nick and vanessa broke up pic.twitter.com/t1nYpBsN6u

Nick and Vanessa from the Bachelor broke up… let's go live to @ravengates09 to see her reaction… pic.twitter.com/N4j1D5kqQ6

Hahahaah omg im still laughing so hard about Nick & Vanessa. I can't believe we had to watch that whole fucking season

Nick and Vanessa called off their engagement #TheBachelor pic.twitter.com/3qwpe4Ek2W

Sorry, the old Nick and Vanessa can't come to the phone right now. Why? Oh! BECAUSE THEYRE DEAD https://t.co/zC6UCz8yvc

Vanessa and Nick broke off their engagement. I totally never saw this coming. #TheBachelor #nickandvanessa pic.twitter.com/mez45TCwnC