Apologies to the Britney Spears fans in advance: You’ll never want to hear me say, we like it this way.

The Backstreet Boys opened their “Larger than Life” Las Vegas residency on Wednesday night in the same AXIS Theater at Planet Hollywood as Spears by dwarfing their former ’90s pop contemporary in terms of live, viable artistry.

The five lead guys — Howie Dorough, Brian Littrell, Nick Carter, Kevin Richardson and AJ McLean — prepared the way any successful veteran band would for a tour: arriving as a fit, rehearsed, modern version of their brand, now following in the dance steps of Jennifer Lopez and Pitbull at the pop-centric Planet Hollywood.

Other than a spectacular opening reveal (above), the show had relatively little production design, but it didn’t need it.

The guys can still perform in an age-appropriate high gear and they led their show — staging, lighting and set pieces did not lead them. (For contrast, let’s revisit the New York Times’ pitch perfect critique of Britney’s Vegas opening night: a “production so winning that it barely needs her at all,” describing Spears as a “pinball” amidst dramatic set pieces, and her own aura as “listless” and “blank.”)

Unlike artists who land in Vegas as a “third act” or a career coda, BSB’s baseline to the culture surrounding pop music has not sputtered. While there have been years in the wilderness off the Billboard charts and AWOL from awards shows (Chris Rock’s famous 1999 VMA speech where he looked out at the boy band heavy audience and said “Here today, gone tonight” comes to mind), BSB have been filling stadiums on tours with New Kids on the Block in recent summers and ramping up for Vegas in a thoughtful, savvy, slow build.

Last fall, they put on a private concert in Burbank, California, which doubled as a group date on Nick Viall’s current season of “The Bachelorette,” which recently aired on ABC.

The Backstreet “men” popped up as WTF-guests with The Chainsmokers during their L.A. homecoming show at the end of 2016, and BSB’s press tour to launch this Vegas residency has landed on all the major press outlets an A-list movie star visits before a premiere — a 95-minute, five-costume-change run through 24 years of their catalogue. 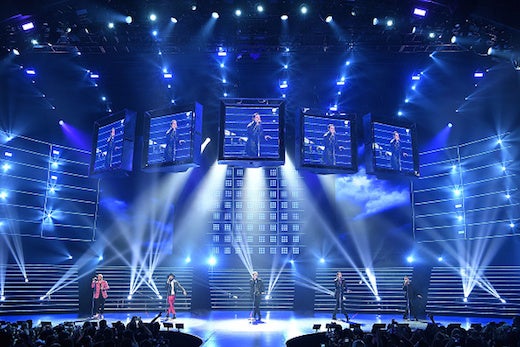 The setlist dovetails with BSB’s peak 1997-2000 three-year, three- album span of “Backstreet’s Back,” “Millenium,” and “Black & Blue,” and only included a portion of one third-party song, Bell Biv Devoe’s “Poison.”

They revealed they have been in rehearsals for eight weeks (to them — an eternity; to those with an appreciation for production — “is that it”?). They sang live (paging Mariah Carey), and both their dance choreography and production choreography was tight. Of note, in the “Everybody (Backstreet’s Back)” finale we noticed their backup dancers seamlessly snatch each guy’s hand mic to clear them for a dance breakdown. Minutes later, the backup dancers slid the mics back in to their hands from behind a split second before the lyrics kicked back in. It was five, slick, simultaneous sleight of hand duets on the David Blaine spectrum.

With an average age of 42, they still have it. 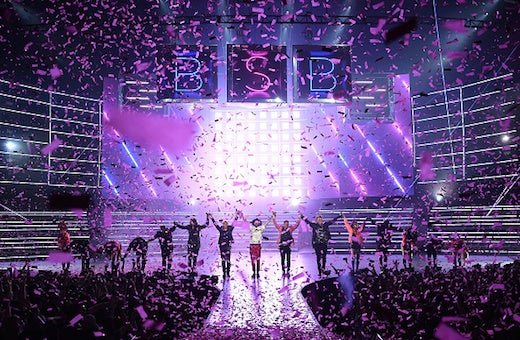 Editors Note: From this point forward, there are set list and show surprise spoilers. Unless you plan on seeing the show imminently and want to know nothing, keep reading.

Beginning 13 minutes after its scheduled 9 p.m. start time (no issue for the over-30, heavily-female crowd), the show began with a 14-minute career-spanning video mashup of both anthems and deep-cut tracks, not shying away from relishing their garish ’90s fashion and hair. It reminds you of the group’s Orlando pop factory origins and their initial release in Europe before their management repatriated them for their second album.

The group opened with “Larger than Life,” wearing their iconic all-white outfits, and continued with “The One” and “Get Down” before nearly 45-minutes of ballads. Brian Littrell joked off their less hyper stage show: “Backstreet’s old … all right!”

Whether older or just a catalogue heavy on ballads, there was not as much high energy dancing in a group as a tight five in center stage. (The false memory of Backstreet as an adrenalized dance troupe may be N’Sync confusion.)

When they performed one song from the audience, two security guards flanked each singer, before the guys made their way through the crowd back up on to the stage.

As predicted, they closed with “I Want it That Way”. (A front-row fan gave AJ McLean an assist during the closer, pointing out the “down” position of the zipper on his magenta pants. McLean shrugged, smiled, and fixed it. There was no wardrobe malfunction.)

The one-song encore — “Everybody (Backstreet’s Back)” — ended in a confetti shower. 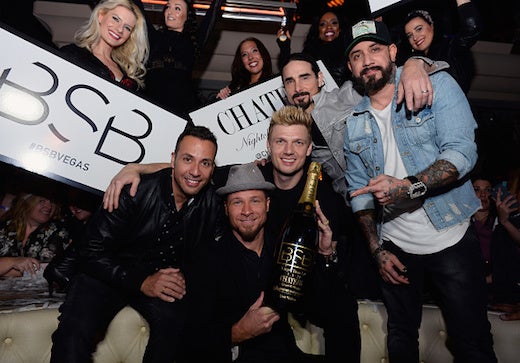 Afterwards, all five guys showed up next door at the after-party under the Eiffel Tower at the Paris Hotel. Inside the Chateau Nightclub, they made an illuminated entrance and climbed on top of the booths in the center as wives and family filled their VIP space in the center. Nick Carter, the youngest at only 37, seemed to enjoy the night the most, singing along on the mic to Ludacris as Howie Dorough slapped his butt.

The initial run of shows is 26 dates through July, mainly on Wednesdays, Fridays and Saturdays. Ticket prices begin at $55 and rise to $299 for VIP Table seating with bottle service.

Bottom Line: We got a complimentary ticket this time and we would pay money to go back and see this again. For a bachelorette party or girls trip, this is the peak. Fellas, bring your ladies.

Here’s the full “Backstreet Boys: Larger than Life” setlist and the year each song debuted: