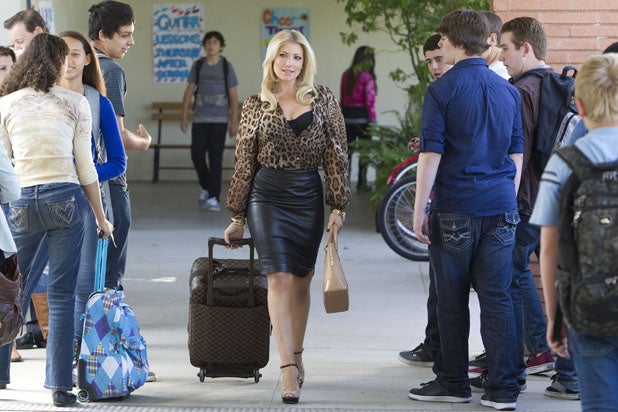 “Bad Teacher” puts on a crass front but is saved by a kindly heart.

Anyone familiar with the 2011 movie of the same name knows the show’s premise: A middle-school teacher determined to land a rich husband sets a deplorable example with a form-fitting wardrobe, casual drug use and indifferent approach to her job.

Except in this case, comedienne Ari Graynor takes over for Cameron Diaz as the shady lady in the classroom. The actress, who previously appeared in “For a Good Time Call…”, stars as Meredith Davis, a trophy wife dumped by her rich husband and shut out by a prenup. The CBS comedy debuts Thursday.

See video: ‘Veronica Mars’ Star Ryan Hansen on Movie’s Sequel: ‘We Won’t Have You Pay for It’

It doesn’t take long before Meredith decides a teaching gig is her quickest route to a rich divorced dad. With scant credentials to her name, she manages to convince principal Carl (David Alan Grier) to give her the job by commiserating about divorce.

Her fellow teachers and the students don’t know what to make of her. They stare goggle-eyed when she struts into Richard Nixon Middle School in slow motion, flipping her hair. “Bad Teacher,” in case you haven’t surmised by now, is a broad network comedy in every sense of the word.

Hardly a candidate for educator of the year, Meredith is prone to using her students to front for her in the classroom and finding the slightest pretext for meeting more rich daddies. She celebrates materialism, is highly self-absorbed, and flaunts her body whenever she can. Her lessons tend to revolve around ways for girls to use their periods to get out of things they don’t want to do.

And yet… Graynor never lets the character fully give in to narcissism. Almost despite Meredith’s better instincts, she takes breaks from man hunting long enough to truly help her young charges from Safety Patrol.

“Fake it until you make it,” she tells the trio in her pep talk. “Girls up, tush out,” she continues, with a light slap on her butt, before she struts them into the cafeteria to confront mean girls.

“Bad Teacher” won’t win plaudits from Ms. magazine. But the show, for all its crass humor, and one really painful joke about stealing information from a Chinese teacher, is ultimately well-meaning. Created for TV by Hilary Winston, a veteran of “My Name Is Earl,” it showcases appealing performances by Graynor, Hansen and Grier.

Its kindly spirit and those performances help prevent “Bad Teacher” from falling into the increasingly raunchy trap of its network predecessor, “Two and a Half Men.”

Oh, and a sight gag about Fighting Quakers is pretty funny.