If “Baggage Claim” proves anything, it’s that black filmmakers can make crappy romantic comedies every bit as well as white ones.

David E. Talbert, who adapted and directed the film from his own novel, manages to expertly assemble every hoary cliché about men, women, sex and relationships into what basically feels like the African-American version of Anna Faris‘ “What’s Your Number.”

Painfully unfunny and entirely unromantic, “Baggage Claim” offers a woefully outdated look at the challenges of finding true love, boosted from mediocrity only occasionally by a handful of supporting performances.

Paula Patton (“Mission: Impossible – Ghost Protocol”) plays Montana, a successful flight attendant whose professional accomplishments are irrelevant since she is the unmarried oldest daughter of Catherine Moore (Jenifer Lewis), who herself had five husbands (and counting). But after her younger sister Sheree (Lauren London) announces that she’s engaged, Montana fears the most humiliating fate of all — showing up at Sheree’s wedding without her own fiancée — and becomes determined to find herself a man.

With 30 days to go until Sheree’s rehearsal dinner, Montana digs through her cellphone contacts and Facebook friends for former lovers that she hopes to turn into her future husband. With the help of her friends Gail (Jill Scott) and Sam (Adam Brody),not to mention a small army of baggage handlers, security guards and travel agents, she ping-pongs back and forth across the country, staging “accidental” reunions with her exes. 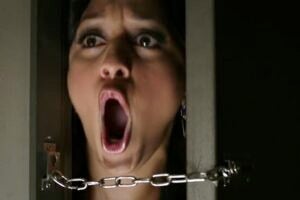 But as she quickly rediscovers the many reasons each of them wasn’t right for her the first time, Montana turns the only person who is capable of understanding her plight — her longtime best friend William (Derek Luke) for comfort, who lives across the hall from her and who knows her almost better than she knows herself.

While many of the men that Montana that dates in the film are legitimately wrong for her, her batting average is actually pretty remarkable, having landed a fairly incredible string of extremely successful, attractive bachelors throughout her single years. But in predictable form, the film completely oversimplifies both their good and bad qualities, reducing their suitability (or lack thereof) to one conspicuous quality — be they already engaged, relentlessly controlling, or preposterously, disinterested in getting married even though they’re willing to commit to a long-term relationship.

For a person who is so relentlessly determined to get engaged, Montana is phenomenally picky, and that combination of desperation and superficiality is precisely as appealing a quality as you can imagine in a character you’re supposed to sympathize with.

To be fair, the film pays lip service to the notion that she doesn’t need a man to define her, and even tries to suggest that her quest for a man prompts the epiphany that she’s perfectly happy and doesn’t need to prove herself to anyone, including her overbearing mother. But within virtually the same breath, Montana continues her search, and the film as a whole demands a resolution that involves only the purest, truest, most perfect long-term love of all time.

Patton’s inability to not try and look pretty certainly doesn’t help the character’s lack of substance, but the script does neither her nor her suitors any favors in offering even a slightly more progressive portrait of the dynamic between men and women.

As its leading lady, Patton is unfortunately a void — there doesn’t seem to be anything in the character except what the dialogue ascribes to her. But her colleagues and costars fare better, especially Jill Scott and Adam Brody, whose catty assistance provides some much-needed levity when the film gets bogged down in the machinery of her pursuit.

Meanwhile, in possibly the smallest role in the film, Djimon Hounsou positively shines as an urbane, enormously successful bachelor who finds her endlessly enchanting, demonstrating not only that he’s capable of bringing intelligence and complexity even to what constitutes a walk-on, but that he’s deserving of better parts than this one.

As a storyteller, Talbert exudes enthusiasm, and it’s easy to imagine him going on to helm films starring Katherine Heigl and Kate Hudson if this one proves successful. But his sense of subtlety is just about nonexistent, which accounts for the film’s complete absence of anything resembling a shade of gray. (No one ever points out that her ostensible role model, her mom, doesn’t make a great case for marriage with four divorces under her belt.)

Even placed gingerly among films that turn classic romance into the stuff of featherweight comedy, “Baggage Claim” sadly reinforces every horrible value about relationships, the most egregious of which being that a woman is simply nothing without a man. But if there’s one new idea that it introduces, it’s that thanks to filmmakers like Talbert, sometimes she’s nothing with one, either.