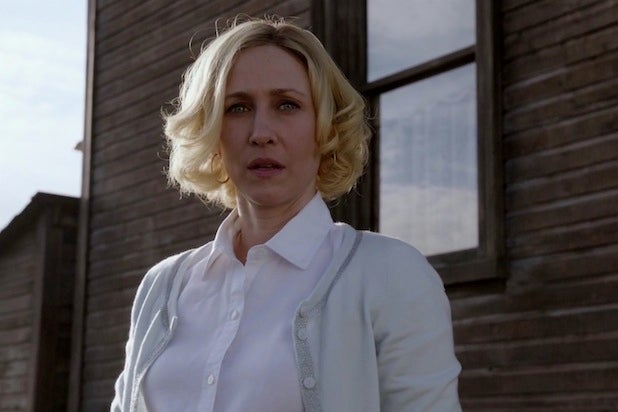 Vera Farmiga‘s dynamic performance as unstable single mom Norma Bates in A&E original series “Bates Motel” demands attention as an Emmy contender for best actress in a drama — perhaps even more so now than when she was first nominated for the role in 2013.

Over three seasons, Farmiga has portrayed Norma’s emotional unraveling as her serial-killer son Norman Bates (Freddie Highmore) slowly evolves into the character so familiar to fans of Alfred Hitchcock‘s 1960 horror classic “Psycho.” Norma scrapes and claws — often literally — to save her son from murder charges, drug dealers and his own spiraling mental health, but receives little sympathy or support for her efforts.

TheWrap talked with Farmiga about the hardest moment of Season 3 and how she would like to see the Emmys reconfigured.

What was the toughest thing you had to do this season?
The toughest thing for me to execute was the shrill hand-to-hand combat with Nestor Carbonell‘s character, Sheriff Romero, in Episode 9. He pins Norma against her wall of dishonesty, demands she tell the truth and Norma goes ape-kaka on him. I’ve never made such barbaric, merciless contact with a man’s face flesh before. An acrimoniously aggressive scene that turns emotionally on a dime into profound sorrow, then regret and then enters sexy-sexy territory of desire, graduating to utmost disgust and resignation. A freaking hard scene to sustain for 30-plus camera takes.

What was the most fun thing you had to do this season?
The biggest hoot, is and always will be presenting Norma’s freak-outs. At least once a season, excrement hits the oscillating air device for Norma and she goes postal.

Let’s assume someone has never heard of “Bates Motel.” What would you say to convince that person to watch it?
There is nothing else like “Bates Motel” on television. Our characters’ neurosis and psychopathy and dysfunction will make you feel so much better about your own.

If you could add a new category to the Emmys, whether serious or silly, what would it be?
Best Voice-Over Introduction by a Showrunner? Carlton Cuse would nab that one. Best Recycled Extra Performer? I have a keen eye for spotting background actors portraying different roles within a single episode of a TV show. The camera operators and focus pullers are always my fave people on a set. Their crafts deserve recognition.

If the Emmys really want to improve upon all other awards ceremonies, they could retool all the Best Actor and Actress categories. Make all the actors in contention really prove themselves by having to each execute the hardest scene from their competitors’ shows and have voters vote based on that information. That would be a veritable contest for ultimate acting supremacy.

What about this show sets it apart from the thriller shows like it on television right now, such as “Penny Dreadful,” “American Horror Story,” “Supernatural” or “Hannibal”?
What sets our thriller apart from others on TV right now is that we are firmly rooted in reality. There is nothing mystical, fantastical, supernatural, spectral or otherworldly in our show. We explore the darkness of the human condition. At the heart, ours is a beautiful story about a single mom’s unconditional love of her dysfunctional child. You are swept away on profoundly moving rapids of heartache and yearning and effort that it takes for a parent to heal their child.

“Bates Motel” was recently renewed for Seasons 4 and 5. Production will start later this year.