“In the Heights” breakout star Leslie Grace has dropped the first look as crime fighter Barbara Gordon in “Batgirl,” the upcoming film set at HBO Max.

“I use their expectations against them. That will be their weakness. Not mine. Let them all underestimate me…and when their guard is down, and their pride is rising, let me kick their butts. – Batgirl, Year One,” Grace shared on Twitter.

The film is currently in production in Glasgow. The film will also star Michael Keaton as caped crusader Bruce Wayne/Batman. 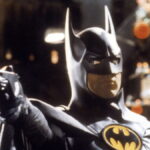 “Birds of Prey” screenwriter Christina Hodson, who wrote “The Flash” for DC, wrote the “Batgirl” script.

Born to Dominican parents in the Bronx, Leslie Grace broke out as Nina Rosario in Jon M. Chu’s film adaptation of “In the Heights,” based on Lin-Manuel Miranda’s Tony Award-winning musical. Grace is also a singer who has recorded songs including “Will You Still Love Me Tomorrow,” “Be My Baby” and “Day 1.” She has received three Latin Grammy Award nominations.