Forget about best picture for a moment. There’s a battle royale shaping up among Oscar’s feature-length cartoons.

The magazine and website Time Out London, in collaboration with director Terry Gilliam, has just published a list of the 50 greatest animated films of all time. The Japanese film “My Neighbor Totoro” is number one, Disney’s “Snow White and the Seven Dwarfs” is number two, and “Toy Story” and “Fantasia” and “Yellow Submarine” and “The Triplets of Bellville” and “South Park: Bigger, Longer and Uncut” are also in the top ten. 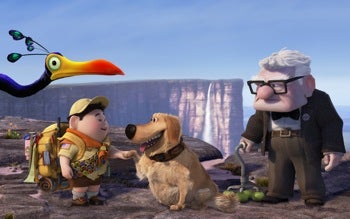 Around these parts, the new Pixar film (right) may be the most acclaimed animated film of the year, and the one 2009 release that’s considered a strong favorite to escape the animated-feature category and wind up in the best-picture race.

But “Up” has yet to be released in the UK.  So it didn’t make the Time Out list, which did honor the previous Pixar films “Ratatouille,” “Wall-E,” The Incredibles” and “Toy Story.”

So it must have put “Ponyo” on the list, right? After all, that film was directed by Japanese master Hayao Miyazaki, who has two films in Time Out’s top 10, “Totoro” and “Spirited Away.”

Nope. No “Ponyo.” That’s not out in Britain yet, either.

Instead, Time Out puts Henry Selick’s “Coraline” at number 22. And coming in at number 49 is a film that the editors call a “maddeningly ingenious and wildly original smart kids’ adventure [that] will one day take its rightful place in the animated pantheon”:

“Cloudy With a Chance of Meatballs.”

It might be a head-scratcher, including the new Sony Animation feature from directors Phil Lord and Chris Miller. But it does serve to nicely illustrate one fact: in 2009, the competition for the slots in the animated feature category may well be the fiercest ever.

(AMPAS rules say that the category will have three nominees in a year in which eight to 15 animated features are released in Los Angeles County and submitted to the Academy; if 16 or more films qualify, the number of nominees can increase to five. Of the eight years in which the category has existed, only 2002 has seen five nominees – and while some consultants working the category this year originally said that they expect a slate of three, it now appears possible that enough films will be released to add two additional nominees.)

It’s pretty much a foregone conclusion that “Up,” despite being left off the Time Out list, is the one lock for an Oscar nomination among animated features. That leaves at last two slots – which, if AMPAS voters agree with Gilliam and a handful of British film writers, means “Coraline” and “Cloudy.”

But it’s just as likely to be “Ponyo” and “The Princess and the Frog.”

And that doesn’t even acknowledge “Ice Age: Dawn of the Dinosaurs,” the second highest-grossing animated film of all time worldwide. Or “Monsters vs. Aliens,” from the perennial category contender DreamWorks.

And while Robert Zemeckis resisted classifying his film “The Polar Express” as animated, there’s been talk that his new retelling of “A Christmas Carol,” shot via motion capture as was that earlier film, could conceivably fit the category.

Many years, the nominees have followed a pattern: there’s the clear front-runner, and then another major-studio film from Disney or DreamWorks or Fox or Sony, and then a smaller, artier film. “Finding Nemo”/“Brother Bear”/”The Triplets of Belleville.” Or “Ratatouille”/”Surf’s Up”/”Persepolis.”

And most years, the animated-feature slate includes one film that fills out the category but mostly draws shrugs from Oscar-watchers: “Jimmy Neutron: Boy Genius,” “Treasure Planet,” “Brother Bear,” “Surf’s Up,” “Bolt” …

This year, though, don’t look for a neat pattern, or any nominated-by-default entries. You could easily have two artier films accompanying “Up,” or you could just as easily have the big boys exert their clout.

My guess at this point would be “Up,” “Coraline” and “Ponyo,” which might well be the strongest lineup the category has ever had. But I haven’t seen “The Fantastic Mr. Fox” or “The Princess and the Frog,” both of which have real potential. And I have a genuine fondness for “9.” And obviously, I now need to catch up with “Cloudy with a Chance of Meatballs.”

If the category expands to five, I’d look for "Up," "Coraline" and "Ponyo" to secure nominations, and then a real free-for-all for the final two slots.

Predicting the eventually winner in this category is a no-brainer.  But when it comes to the other nominees, who knows? It’ll be a dogfight.

Or a frog, fox, dinosaur, monster, alien and/or foodfight.

(ADDENDUM: The original version of this story has been amended to reflect the fact that there now appears to be a reasonable chance for a five-picture slate of nominees.)