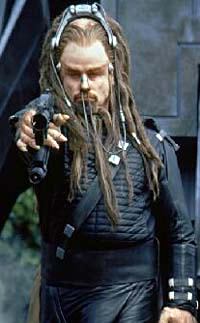 J.D. Shapiro, the original screenwriter behind "Battlefield Earth," let loose with a full-disclosure apology in Sunday’s New York Post, including the admission that his libido was to blame for getting him involved with the project based on Scientology founder L. Ron Hubbard’s sci-fi novel.

Shapiro, who showed up at the Razzie Awards to accept the honor of "worst movie of the decade," also wrote "Robin Hood: Men in Tights," "We Married Margo," and is working on a King Arthur spoof.

Here’s how the apology starts:

"Let me start by apologizing to anyone who went to see "Battlefield Earth." It wasn’t as I intended — promise. No one sets out to make a train wreck. Actually, comparing it to a train wreck isn’t really fair to train wrecks, because people actually want to watch those.

It started, as so many of my choices do, with my Willy Wonker.

It was 1994, and I had read an article in Premiere magazine saying that the Celebrity Center, the Scientology epicenter in Los Angeles, was a great place to meet women.
Willy convinced me to go check it out."
Read the full text of his apology at the New York Post.
x
Looks like you're enjoying reading