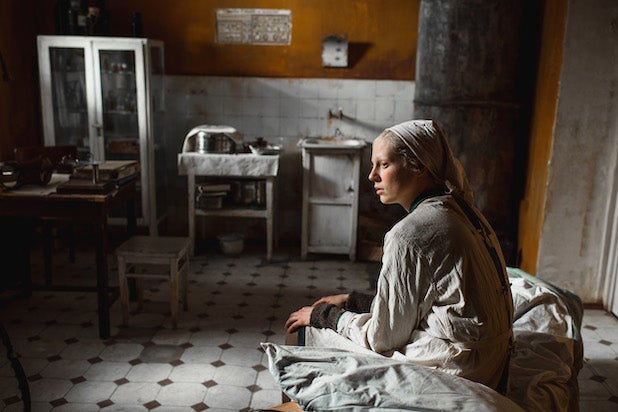 An immaculately color-coded, visually resplendent serving of European art-house severity, “Beanpole” brings its sharp performances and even sharper production design to a landscape wholly untouched by humor. Which is, in itself, a kind of irony, as the Cannes prizewinner sketches out a central premise that plays as a vicious cosmic joke.

Set in Leningrad (present-day Saint Petersburg) in the aftermath of that city’s years-long siege during the Second World War, the film focuses on characters who survived the worst hardships imaginable and made it out the gates of hell — only to find that on the other side lay purgatory, and the experience there wasn’t much better.

With his second film, 27-year-old Kantemir Balagov, who won the directing prize at Cannes’ Un Certain Regard sidebar last May, spotlights the toxic friendship of two army nurses of ages that roughly correspond to his own, but with life experiences that couldn’t be more different.

We first meet Iya (Viktoria Miroshnichenko), the lanky beanpole of the title. Afflicted by a head injury that sends her into prolonged fits of walking catatonia, Iya has been sent back from the front to care for veterans at an army hospital and to look after her friend Masha’s young son.

Iya’s disability makes her a less than ideal caregiver, and indeed, tragedy strikes shortly before Masha (Vasilisa Perelygina) returns to Leningrad. Provocatively, the two women never speak about the loss head-on, in part because unspoken grief animates everything that will follow, and in part because the grief which hangs over the film is not limited to just one child.

Balagov uses these two young women to explore this specific place where people see pictures of children and offhandedly ask whether those kids are still alive — and the answer is invariably no.

Drawing inspiration from oral history from the era and from the book “The Unwomanly Face of War,” Balagov applies this gangly blonde and fiery brunette to dramatize a central paradox: Those most damaged by the war and least equipped to move on were the very ones tasked with taking society forward.

He builds that tension into the women’s relationship. Masha wants to get pregnant, but her own war wounds have made her infertile. Iya is biologically able to carry children but is not physically or emotionally equipped for any of the other responsibilities. An uneasy pact emerges: Iya will carry the child for Masha as a kind of unspoken indemnity for the life snuffed out. Of course, first they must find a father, and are not above blackmail to do so.

As Balagov has it, the foundations of this post-war world were built on greed, guilt, fear and despair – though he never mentions Lenin or Stalin or any of the larger political movements of the time. Instead, he explores those social forces figuratively via his two main characters — nurses with bodies irreversibly broken by the war tasked with healing others.