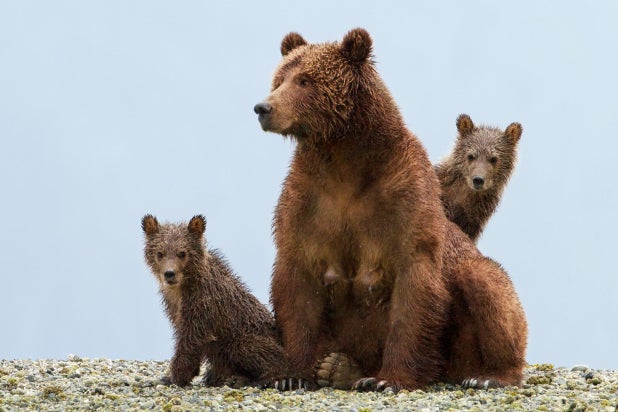 The adorableness factor is pretty much off the charts in “Bears,” the latest annual offering from Disney’s “Disneynature” imprint.

Following the journey of a mother bear and her two infant cubs over the course of a year, the film mixes how’d-they-get-that-shot outdoor photography with a mostly kid-friendly Intro to Life Sciences.

Young viewers who found it traumatic when those Disney “African Cats” devoured zebras and gazelles may be less disturbed at the sight of bears tearing into salmon, but there are occasional moments of peril that parents might want to consider before bringing their littlest ones to this G-rated documentary.

John C. Reilly narrates the tale of “Sky,” a mama brown bear who has spent the winter cuddled up in a cave with her newborn cubs “Scout” (a male) and “Amber” (a female). As their Alaskan home turf begins to thaw, the three of them must make their way down the mountain to find sustenance; the narration tells us that Sky must eat about 90 pounds of food a day to create enough milk to keep Scout and Amber fed.

(That’s one of the few tangible factoids the movie has to offer; the laconic narration, written by Alastair Fothergill and Adam Chapman, slips in a few bits of information, but it’s not like we get David Attenborough or Neil deGrasse Tyson stepping out from behind a tree to tell us more about the lives and habits of the brown bear.)

Over the course of the year, the family will encounter angry alpha bears, sneaky foxes, helpful ravens and delicious, delicious salmon. We see the two cubs begin to come of age, with Scout boldly rushing into things while Amber prefers to stay close to Sky, often literally hanging off her mom’s back. Some of the “dramatic” moments may have been contrived in the editing room, but their struggle for survival makes for an interesting story.

Directors Fothergill and Keith Scholey (who previously collaborated on “African Cats”) and co-director Chapman keep things moving briskly. And while the film skirts around anything that might be too scary or violent (or animal-sexy), “Bears” acknowledges many facts of life, from the mechanics of breastfeeding to the vulnerability of young cubs as tasty prey for other animals and even other bears.

The closing credits show how the crew was able to capture both the expansive vistas of the Alaskan wilderness and the up-close-and-personal looks at their animal stars — although anyone who’s seen “Grizzly Man” will be nervous about just how close those camera operators got to the action.

It’s hard not to immediately adore the stars of “Bears,” with their dog-like snouts and bright eyes and obvious affection for one another. Still, if there’s a breakout star here, it’s sneaky, hungry, cub-stalking, salmon-stealing wolf “Tikaani,” who really knows how to hold a close-up. Somewhere, a team of writers is whipping up a script for “The Grey 2.”

Also read: ‘Heaven Is for Real’ Opens at No. 1 at Box Office and Gets ‘A’ CinemaScore

The Disneynature movies shouldn’t be mistaken for traditional documentary, but if they act as a gateway drug for young children to learn more about the animal kingdom — and to open themselves up to more informative non-fiction cinema — then the films are serving a real purpose.

If nothing else, kids can empathize with Scout and Amber; they’re all just starting to take in the big world around them. And developing a taste for seafood.