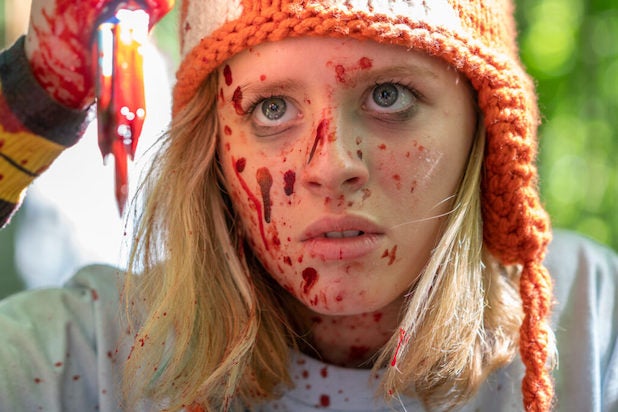 There are times, I suppose, when it’s a good thing that most of the open movie theaters are drive-ins. Or maybe it’s just that there are films that scream “B movie!” and belong in a setting that also screams “B movie!”

“Becky” certainly screams that, among the many other screams that emanate from its pint-sized, titular avenger. It’s a silly bloodbath administered by a vicious 13-year-old in a knit fox cap with cute little ears that flap as she makes the bad guys bleed. And if you’re desperate to get out of the house and you’ve already seen “The Wretched,” why not go for the movie that rewrites “Home Alone” in a way that gives the Joe Pesci and Daniel Stern characters gruesome, horrible deaths?

None of this, by the way, really qualifies as spoilers. In the opening scene, we see young Becky talking to the police in the aftermath of some unspecified awful events — so when the film flashes back to show us those events, we know she’s going to survive. And when a quartet of neo-Nazis escapes from prison and shows up at the lake house where Becky’s dad has taken her, we know that for Becky to survive, other people are going to pay.

Also Read: 'The Vast of Night' Film Review: Sci-Fi Thriller Feels Like the '50s - And Like Today

On paper, it’s sort of a kick that the head bad guy is Kevin James, who has spent his career playing amiable and goofy without ever venturing in the vicinity of mean or evil. With a bald head, bushy beard and swastika tattoo, he’s a Kevin James we’ve never remotely seen on screen, but he’s not terribly interesting as a one-dimensional and ultimately ineffectual white supremacist. When Adam Sandler went serious for “Uncut Gems,” he worked the inherent likability of his usual goofball characters to his advantage — but beneath that beard and those tattoos, James could be anybody.

James’ character, Dominick, arrives at the lake house in search of a key that apparently opens something very, very valuable, and quickly shows he means business by shooting the fiancé of Becky’s dad, Jeff, in the leg. The problem is that Becky isn’t in the house — she’s off sulking in her own shed/fort, because she’s disgusted by how her father (played by Joel McHale) is engaged only a year after the death of his first wife, Becky’s mother.

Even when we see her in school, there’s something feral about Becky, who is played by the teen scream queen Lulu Wilson (“The Haunting of Hill House,” “Annabelle: Creation,” “Ouija: Origin of Evil”). So when she figures out what’s going on in the house, it’s not much of a stretch for the disaffected young woman to unleash all that teenage rage and turn into an avenging angel with a surprising knack for setting deadly booby traps and fashioning art supplies into lethal weapons.

And make no mistake, directors Jonathan Millot and Cary Murnion glory in every drop of blood Becky draws: This is a movie that shows you a guy getting stabbed in the eye, then ups the ante to show the eyeball dangling from its socket, then sticks around so we can see the determined baddie sever his own optic nerve and leave his eye in the sink.

If that’s your idea of fun — and if you’re OK with murderous white supremacists at the center of a horror flick, an uncomfortable idea in the best of times — then by all means catch “Becky” at a drive-in or on VOD, the formats in which the film is being released after its planned Tribeca Film Festival premiere was canceled.

But for all its wide-eyed embrace of murder and mayhem, the film feels rote as it goes about its bloody business. Still, Wilson does make for a ferocious foe, and she certainly warrants Dominick’s eventual and understated realization: “Apparently, Becky’s a little more than we bargained for.”

Her fox cap is a nice touch, too, and one that hints at a movie with more of a sense of humor than we see in this one until the very end. At that point, though, a couple of fitfully amusing showdowns between Becky and the bad guys feel like too little, too late — though admittedly, she gets a hell of a (nonverbal) punchline at the end of one of those showdowns.

To say that Becky is the reason to watch “Becky” is, perhaps, to state the obvious. The movie is kind of a nasty piece of work, but the girl at its center might be the one to really give you nightmares.