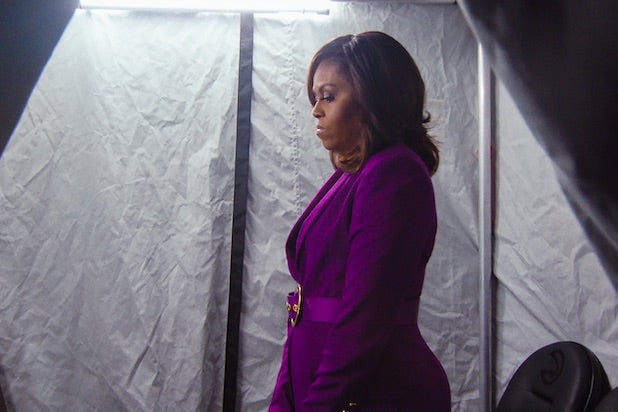 A celebration rather than an examination, “Becoming” is the Michelle Obama documentary you might expect from Higher Ground Productions — the company founded by the former first lady and her husband, under whose Netflix deal the film is premiering on Wednesday, May 6.

There are no big revelations or buried secrets in “Becoming,” no uncomfortable moments for the film’s subject except in archival footage and no attempts to probe deeply into her psyche. Instead, it’s Michelle Obama as she chooses to present herself — in her memoir for which the film is named, on the book tour to promote that memoir and in interviews that are interspersed through the film.

That makes the film less artful and less significant than Higher Ground’s first two documentaries, the Oscar-winning “American Factory” and this year’s Sundance hit “Crip Camp.” But it’s not necessarily a bad thing that “Becoming” is about as authorized as a doc can get; in these days of bitter political divisions, the film is of interest almost solely to viewers who come in as fans of the Obamas, and those viewers will no doubt find both interest and comfort in this openhearted portrait.

The film won’t have the impact of Hulu’s recent four-part documentary series “Hillary,” about Hillary Clinton, which included the former secretary of state settling scores with Donald Trump and Bernie Sanders, among others. In “Becoming,” Michelle Obama spends far more time inspiring than complaining, with her most pointed comments reserved not for Trump – who is mentioned only in passing – but for black, young and women voters who stayed home when Barack Obama wasn’t on the ballot.

“A lot of our folks didn’t vote,” she says in a Q&A shown in the film. “It was almost like a slap in the face. I understand the people who voted for Trump. The people who didn’t vote at all – the young people, the women – that when you think, ‘Man, people think this is a game.’

“It wasn’t just in this (2016) election,” she continues. “Every midterm. Every time Barack didn’t get the Congress he needed, that was because our folks didn’t show up. After all that work, they just couldn’t be bothered to vote at all – that’s my trauma.”

But the film isn’t concerned with rehashing that trauma, and Michelle Obama isn’t interested in talking about the current president except to tell an amusing anecdote about trying to motivate her daughters and their two friends who’d had one final sleepover on the morning of Trump’s inauguration. (“Wake up, you gotta get out! The Trumps are coming!”)

“Barack and I are not interested in being at the forefront forever,” she says at one point. “Not even for that much longer.”

Also Read: Barack and Michelle Obama to Give Virtual Commencement Speeches on YouTube

So “Becoming” is both a look back and a tentative look forward to an uncertain future of mentorship. Directed and shot by Nadia Hallgren, it includes fly-on-the-wall footage from her book tour, as well as onstage moments in which Michelle Obama talks about her life, talking-head interviews and what sounds like some passages from the audiobook version of her memoir.

Of course, these are not scenes from a normal book tour. Two years after leaving the White House, Michelle Obama spoke about her book at 34 sports arenas around the country, with celebrity moderators who included Oprah Winfrey, Reese Witherspoon, Stephen Colbert and Conan O’Brien. We see snippets from those conversations as well as backstage moments and visits with high school students, which are clearly a particular passion for the former first lady.

The story that emerges is one of a driven young women who took affront when her high-school guidance counselor told her she wasn’t “Princeton material.” She got into that college anyway, where she found that “for the first time in my life I stood out” because of her skin color; in fact, the mother of one of her roommates insisted that the girl switch rooms rather than live with a black roommate.

At Princeton, though, she also learned that the classmates who looked as if they belonged weren’t necessarily any smarter or more deserving than she was. “There’s all kinds of affirmative action,” she says at one point. “There’s legacy, there’s the college athletes … Universities have a right and an interest in diversifying – the problem is that when it comes to students of color, poor kids, all of a sudden that’s ‘affirmative action’ and that’s a problem.

“I have been at probably every powerful table there is in the world,” she continues. “I’ve been at G summits, I’ve been in castles and palaces, in boardrooms, in academic universities, and I am coming down from the mountaintop to tell every young person that is poor and working-class and has been told, regardless of the color of your skin, that you don’t belong – don’t listen to them. They don’t even know how they got at those seats.”

This is typical of Michelle Obama in the film, in which the anger she no doubt felt along the way is turned into messages designed to give strength to young people. “Becoming” briefly follows a couple of those young women in their own lives, but these sequences feel oddly out of place; Hallgren either needs to change the approach to make more of them, or stick with the woman who’s at the center of this story.

As it is, we see many examples of what Michelle Obama means to people of all ages, along with glancing acknowledgments of how much she and her husband were hated by others. “Barack and I lived with an awareness that we in ourselves were a provocation,” she says at one point.

But provocation is not what “Becoming” is about. Toward the end, on the last stop of the book tour, Michelle Obama tells Stephen Colbert, “The energy that’s out there is much better than what we see. I wish people didn’t feel badly, because this country is good. People are good, people are decent.”

She adds, “We’re at a crossroads where we have to think about, ‘Who are we as a nation?’ I remain hopeful that people want better – if not for themselves, then for the next generation.”

Some may find that blindness rather than optimism; some may resist the message because of where it’s coming from, or wish that there was more of an edge in the film. But those people aren’t the ones that the movie was made for. It’s tricky to tell a feel-good story in a time in which many people are feeling anything but good, but “Becoming” film insists on doing just that.