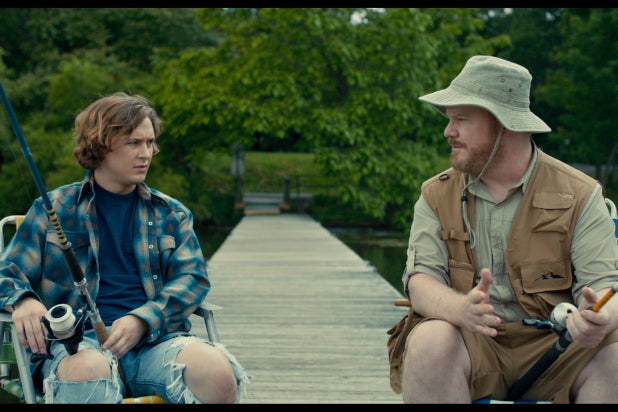 Miranda Bailey’s narrative directorial debut “Being Frank” is a comedy about male hypocrisy set in 1992 that dives into many intriguing ideas and issues and gives us a lot to consider. This is commendable — given that many commercial comedies give us nothing to consider at all — but there is a tug-of-war here between her attempt to explore her characters in a very serious way with a consistent emotional basis and the demands of the material as written by Glen Lakin, which is clearly meant to be played as farce most of the time, particularly towards the end.

The first moments of “Being Frank” show high school senior Philip (Logan Miller) doing a practice job interview with his father Frank (Jim Gaffigan), and the way the shots are composed makes us feel Frank’s bullying control over his son; the effect is oppressive and even alienating at first, but to a point. This film is about Frank and his secrets and the insecure basis of his authority over others, and there’s more than a bit of menace in that.

We meet Frank’s wife Laura (Anna Gunn) and his young daughter Lib (Emerson Tate Alexander), and both of them are richly characterized in just a few moments of screen time. Philip has gotten into NYU, but his father wants him to stay closer to home and go to a state college, and they have a bad fight about this. The dynamic set up here is clear: Philip is understandably resentful of his father, who is always taking long absences from home, and Frank is seen as a tyrant and a judgmental underminer of his son.

Watch Video: Marin Ireland on Why We Get a Different Jim Gaffigan in 'Light From Light'

The premise of “Being Frank” is that Philip finds out that his father actually has another family in another town, which would be cause enough for him to feel the pain of betrayal. But what really stings here is how much Frank prefers this other family, presided over by Bonnie (Samantha Mathis), an attractive bohemian in a blue caftan who makes cookies shaped like ears. When Philip bites into one of her cookies and feels a piece of paper in his mouth, Bonnie says, “Read it, it’s a haiku,” and Mathis says this in just the right fast, simple way to get a big laugh.

The laughs here, however, are few. When Frank tells Philip how sorry he is, Philip says that Frank is really only sorry that he got caught, and lines like this have a particular force in this particular moment of reckoning over bad and selfish male behavior. We are given cause to wonder why Frank kept his first family when his second family is clearly so much more satisfying to him, especially his jock son Eddie (Gage Banister, billed here as Gage Polchlopek). We are also faced with the suspense of whether or not Philip will be able to resist his extremely attractive half-sister Kelly (Isabelle Phillips, “To Dust”), who is drawn to Philip and often looks ready to kiss him.

Most of the scenes in the mid-section of “Being Frank” are about how Philip and Frank fight with each other in front of Bonnie and Kelly and Eddie without giving away Frank’s secret, and music cues of songs from the early 1990s help to move the film along when it gets stalled or too clogged with various characters, which is often. There are so many people to consider here and so many points of view that adding a stoner character played by Alex Karpovsky — who seems to change his behavior from scene to scene — finally makes the whole movie collapse.

The way that Frank is written and played and even lit (by cinematographer Yaron Scharf, “Footnote”) is so convincingly negative in tone that it’s difficult to get on board when we are meant to see him finally as a caring father doing the best he can in a confession scene he shares with Philip. What might have made this work is if we could have doubted the way that Frank sees himself and seen that deep down this is just another mode of manipulation and another reason why Frank is someone to avoid at all cost. It feels like Bailey might be ready for that possibility, but the script cannot be made to accommodate it.

Bailey also produced “Being Frank,” and she has been a producer on Noah Baumbach’s “The Squid and the Whale” and Marielle Heller’s terrific and very frank “The Diary of a Teenage Girl.” She shows talent in “Being Frank,” but it feels like this talent would be better suited to a more straightforward dramatic film with far fewer characters.