Peacock has released a new teaser trailer for the upcoming series “Bel-Air,” a dramatic twist on the Will Smith sitcom “Fresh Prince of Bel-Air,” and the new footage reveals a shockingly dark origin story for the central character.

Set in modern-day America, the one-hour drama series reimagines the story of a Black kid from the streets of West Philadelphia who is sent to live with his rich aunt and uncle in Bel-Air. But as this teaser reveals, Will is actually shipped to the West Coast following an altercation and shooting on the basketball court.

Once he arrives in Bel-Air, Will must contend with this new world and navigate the conflicts, emotions and biases he now faces.

Will Smith serves as an executive producer on the series so there’s certainly connective tissue to the original (and beloved) show, but this is clearly a dramatically different spin on the story – from the tone of the series to the portrayal of characters like Carlton and Hilary.

“At its heart, ‘Bel-Air’ is a coming-of-age story that celebrates the strength and love of the Black family,” executive producers and showrunners T.J. Brady and Rasheed Newson explained in a statement. “We have stayed true to the original premise of the legacy series – Will’s life is turned upside down after he is forced to leave West Philly and lands in Bel-Air with its gated mansions and wealth, however, our new series brings Will and the Banks family into the world as we know it now. It’s been incredible to bring these iconic characters to life when you tap them into the cultural pulse of our time. The series was the fabric of so many of our upbringings, tied to memories and the joy of seeing ourselves represented on TV so it is important to us to pay respect to its legacy.” 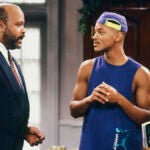 You can watch the new teaser in the player above, and check out the show’s new poster below. The first three episodes of “Bel-Air” will premiere on Peacock on Super Bowl Sunday (Feb. 13) with new episodes released weekly after that.