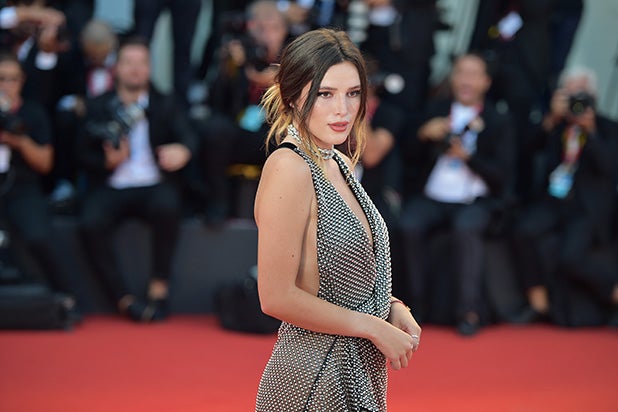 The launch of Bella Thorne’s lucrative OnlyFans page has garnered much attention for the platform, but sex workers who rely on the site for income say they have seen the consequences in their earnings.

According to OnlyFans performers on Twitter, Thorne’s $2 million windfall has resulted in a new cap on how much the platform is allowing them to charge for pay-per-view content. The site has also extended the waiting period before they’re allowed to cash out their earnings, from seven to 30 days.

Users said the move to cap earnings came after Thorne allegedly sold a $200 photoset to subscribers of her otherwise PG-13 account with the promise of “no clothes nudity.”  A representative for Thorne did not immediately return TheWrap’s request for comment.

In a statement, a rep for OnlyFans told TheWrap, “Transaction limits are set to help prevent overspending and to allow our users to continue to use the site safely. We value all of the feedback received since this change was implemented and we will continue to review these limits. Our objective remains to provide the best platform possible for the OnlyFans community. We can confirm that any changes to transaction limits are not based on any one user.”

“So cute how Bella Thorne made her OnlyFans on a whim without doing an [ounce] of research on how it would impact the community and she immediately f–ed it up for us,” OnlyFans performer Savana Solo wrote in a tweet. “LOVE that!”

Thorne, a former Disney Channel star, made headlines earlier this week when she shattered OnlyFans records by making $2 million from her page within a week. She reportedly became the first creator to pull in $1 million in 24 hours by charging her fans a subscription fee of $20 a month.

While the platform is primarily known for sexually explicit content, Thorne is just the latest high-profile creator to launch an OnlyFans page that does not contain nudity. Cardi B announced the creation of her own page earlier this month, promising a behind-the-scenes look at the making of her chart-topping single “WAP.”

In an interview with the Los Angeles Times, Thorne said she sees OnlyFans as a place where she “can really just be more personal with my fans.” The actress said she joined the site as research for an upcoming film with “The Florida Project” director Sean Baker, a project which is said to be “very early in its development.”

“What are the ins and outs? What does a platform like this do to its users? What’s the connective material between your life and your life inside the world of OnlyFans?” Thorne explained. “How can it change your life for the worse and the better? How far are you willing to go, and how far do you WANT to go? You can be me, or this talented girl from Montana, and OnlyFans could change your life — if you want it to, of course.”

(UPDATE: For his part, Sean Baker says he has nothing to do with an OnlyFans project involving Bella Thorne. He tweeted on Friday, “I would like to make it clear that the news of me making a film (documentary or fiction narrative) about OnlyFans and using Bella Thorne as research is false. I’m NOT attached to this project.”)

“It took 48 hours for Bella Thorne to ruin things for us OF creators/SWs because she felt like playing a pretend SWer,” wrote an OnlyFans performer who goes by the name Neptune. “She scammed her subs and will never face the consequences of doing so (while the rest of us deal with it) among the general stigma of being in this field.”