A version of this story about “Belle” first appeared in the special animation section of Awards Preview issue of TheWrap’s awards magazine.

The “Beauty and the Beast” story seems particularly suited for animation, and for reinvention.

The tale of a forbidden love between a virtuous human woman and a monster is full of opportunities that really blossom in animation — wild transformations, magical objects and the exaggerated visual dramatization of such an unlikely romance. Thirty years after Disney’s “Beauty and the Beast” enchanted audiences (and became the first animated feature ever nominated for the Best Picture Oscar), there’s a new and very different version of the story ready to steal your heart.

“Belle,” the latest animated feature from Mamoru Hosoda (Mirai, “The Boy and the Beast,” “Mirai”), takes the folkloric tale into the current technological landscape and beyond. It follows Suzu, an awkward girl who lost her mom at a young age and who is flourishing in a computer-simulated world known as the U. In the U, she reimages herself as a pop singer named Belle, who encounters a fearsome beast known as the Dragon. She forms an unlikely friendship with the creature, while attempting to figure out who he is in real life (could it be someone close to her?) and protect him from those inside the U looking to destroy him. 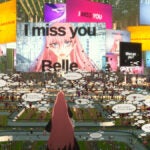 To create the world of U, Hosoda called upon a diverse array of talent, with character designs courtesy of Disney veterans Jin Kim and Michael Camacho and backgrounds coming from Cartoon Saloon, the Irish animation studio responsible for the Oscar-nominated “Wolfwalkers” and “Song of the Sea.” “’Belle’ takes place in a virtual world via the internet,” Hosoda said. “We wanted to have this global feel to the film in general. By collaborating with guys like Jin Kim and [Cartoon Saloon’s] Tomm Moore, it was all about bringing in great talent from all over the world and coming together as one team. That’s something that we wanted to do for this film, to align our production with the theme of the movie, which is this whole global virtual setting.”

Somewhat surprisingly, the most striking moment in “Belle” takes place outside of the kaleidoscopic landscape of the U, in the comparatively mundane real world. It’s in a train station where Suzu and two of her friends are engaged in a very awkward meet-cute. What makes the scene so striking is that it’s a single shot, held for an uncomfortably long time, with some of the greatest animation performances in recent memory. It’s both funny and real and excruciating (in the best way).

Hosoda admits that the scene “turned out to be a lot more hilarious than I anticipated it was going to be.” Two of the characters in the scene, Kamishin and Ruka, are “the other Beauty and the Beast couple,” according to Hosoda, and the idea of holding the shot for so long was a way of getting the audience involved in their relationship. While it might seem like a technological marvel, Hosoda suggested that it was not difficult, just different. “Both in American and Japanese films, you don’t really see scenes like that, where it’s held for very long,” he said. “Making it was very simple — the idea is where the value is, where we have the audience participate by using their imagination. It’s dialed back a little bit, but I think the concept is unique.”

In the exclusive video above, Hosoda details his choices in the scene and breaks down what makes it so special.