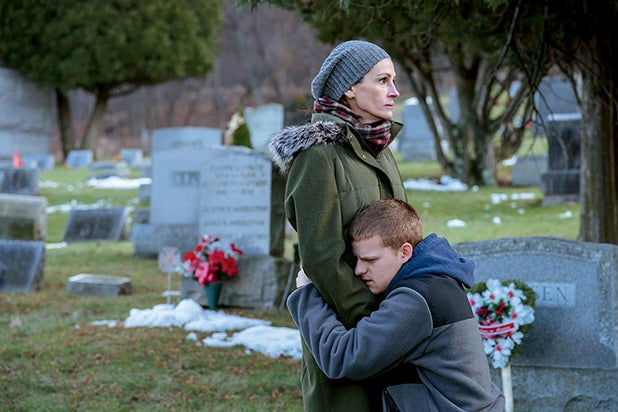 This story about Peter Hedges and “Ben Is Back” first appeared in the Actors/Directors/Screenwriters issue of TheWrap’s Oscar magazine.

In “Ben Is Back,” writer-director Peter Hedges tells the story of one day in the life of a family whose oldest son has been battling an opioid addiction. Fresh from a stint in rehab, Ben Burns (Hedges’ real-life son Lucas) makes an unexpected appearance at his family’s house for Christmas, leading his mother (Julia Roberts) on a descent into the drug underworld to help save him.

“This was untenable loss, so I started exploring why heroin and opioids were impacting so many many people I love. And it’s happening to people everywhere in America. I knew I wanted to write about the epidemic in a very personal way.”

Most films about addiction show us the course of the disease, the ups and downs, the rehabs and relapses. But in “Ben Is Back,” those stories come out in passing as Ben and his mother struggle through a nightmarish Christmas night in which his past comes back to haunt them.

“The epidemic itself felt way too big to take on,” Hedges said. “But I felt that I could explore one family over the course of one day — and if I did that in a truthful way, I could perhaps explore many aspects of the epidemic in a very intimate way. And for anyone in recovery, ‘one day at a time’ is a mantra.”

Hedges thought about other films he liked, including Thomas Vinterberg’s 1998 drama “The Celebration,” which were set over the course of a single day or a weekend. “I love films that take place over a short period of time, and I feel that those films are in our cinematic DNA,” he said. “But I hadn’t seen an addiction story told over a short period like that.”

For Hedges, it was also important that Ben be in rehab when the film starts, not in the throes of addiction. “I liked that Ben had some recovery when the story starts, that he was beginning to do well,” he said. “From the research I did and the people in my life, I know that in those early days of recovery, people are vulnerable to ‘the pink cloud,’ the feeling that everything’s OK.”

And the writer-director wanted to show glimpses of happier times, to find lighter notes before “Ben Is Back” plunges into darkness. “Part of what makes the epidemic so tragic is that really remarkable people are transformed by the drugs,” he said. “So getting a sense of what life would be like without the disease also gives you a sense of how damaging it is.

“And that’s been my own experience: Many of the most remarkable people I know are in recovery, and they’re vital and dynamic and funny and full of life. I wanted that to be evident in the story, I wanted to feel the love in the family, the potential they have for a full life together.”

“I received tremendous help from a handful of people who have lived Ben’s life, and who challenged me on Ben’s truthfulness after they read the screenplay,” he said. “In my first draft, I believed everything Ben said. And they encouraged me to consider that while we may like to believe what he’s saying, he’s still sick and he is not always going to tell the truth.

“And that shifting question throughout the story — ‘Can I believe him?’ —  ended up adding enormous tension to the story, and actually reflects what people go through every day.”