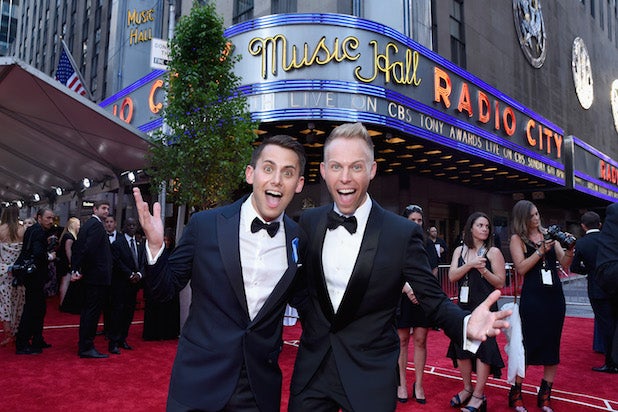 A version of this story about Benj Pasek and Justin Paul first appeared in the Down to the Wire issue of TheWrap’s Emmy magazine.

Every since composers and songwriters Benj Pasek and Justin Paul had the formidable one-two punch of “La La Land” and “Dear Evan Hansen” in 2016, they’ve been on the verge of making showbiz history.

They won the Oscar for “City of Stars” from “La La Land” in February 2017, two Tonys for “Dear Evan Hansen” less than four months later, and Grammys for both soundtrack albums the following January.

In less than 12 months, they completed three of the four legs of the EGOT, lacking only an Emmy to complete that Emmy-Grammy-Oscar-Tony grand slam. And with their 2018 Emmy nomination for the song “In the Market for a Miracle” from the live broadcast of their 2012 musical “A Christmas Story,” the 33-year-old University of Michigan graduates could become both the youngest EGOT winners in history and by far the fastest to complete all four legs.

(Robert Lopez is currently the youngest, winning his EGOT at the age of 39, and the fastest, winning all four awards in a 10-year span that will seem positively glacial if Pasek and Paul pull it off in less than 19 months.)

When they began to work on the TV version of “A Christmas Story,” which is based on their Broadway adaptation of the 1983 film, Pasek and Paul knew they wanted to add new material to their original stage show.

“That was always part of the conversation,” said Paul. “We were interested in what could we do to make it feel fresh and new, distinguishing it from the Broadway show. And very early on the idea came about to incorporate what every great Christmas musical needs, which was a Hanukkah song.”

“In the Market for a Miracle” is a sprightly little ditty about being Jewish at Christmas, inspired by the fact that the original film features a family named Schwartz in the fictional town of Hohman, Indiana.

“With the name Schwartz, we figured they probably weren’t celebrating Christmas,” Pasek said. “So what would they do? They’d go to a Chinese restaurant, because those are the only ones that are open.”

“We were thinking about how to expand the characters in the spirit of inclusion,” Paul added. “Everybody at this time of year is hoping for that great present, hoping for a miracle. And we said, ‘There’s no reason we shouldn’t have a Hanukkah number that can help tell that side of the story.'”

Added Pasek, “One of the reasons why the source material is so popular for so many people is that the memories you remember are when the turkey burns, when things go haywire — those are the best family moments. We wanted to say that everyone of every faith has that family dynamic.”

They tinkered with the song for a while, unsure of the right musical approach until lead actress Ana Gasteyer told them that she does a “klezmer jazz” song and plays the violin in her nightclub act. At that point, Paul said, they knew the approach they’d take: “We didn’t really know what klezmer jazz is, but we said, ‘We’re definitely going to write a klezmer jazz song where you play the violin.'”

Their song, “In the Market for a Miracle,” is up against others from “Big Mouth,” “The Good Fight,” “Saturday Night Live,” the Steve Martin and Martin Short special and the documentary “If You’re Not in the Obit, Eat Breakfast.”

And they’re competing on a show that could become the biggest night for EGOTs in history, because three of the producers of “Jesus Christ Superstar Live in Concert” — John Legend, Andrew Lloyd Webber and Tim Rice — could also complete their EGOTs if that show wins in the Outstanding Variety Special (Live) category.

In fact, the bulk of the EGOT spotlight this awards season has been squarely aimed at Legend and his “Superstar” colleagues, which suits Pasek and Paul just fine. “There’s no way of avoiding it, but it’s fun that we’re not the main story this year,” said Paul, who with Pasek also wrote the songs for the hit movie “The Greatest Showman” last year. “Some of our heroes, like Andrew and Tim, could also get it.

“And it represents that people are interested in and hungry for and excited about musicals on film, on TV and on Broadway. Those are all exciting, robust, inspired art forms now, and that hasn’t always felt like it’s been the case.”