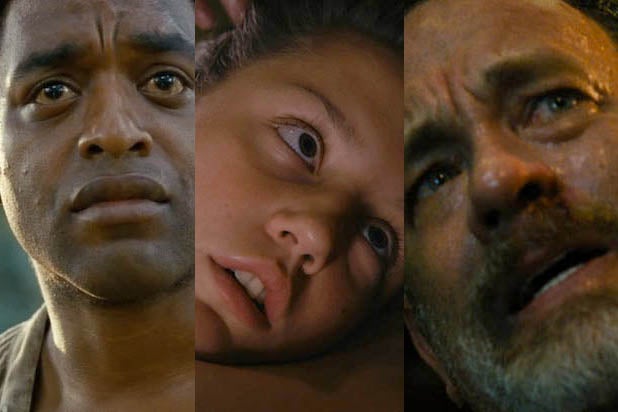 Thanksgiving has come and gone, which means the end of 2013 is just weeks away, so it’s time to look back at the films TheWrap’s staff has seen this year, and pick out the moments — large or small — that wowed us for one reason or another.

From that 10-minute sex scene in “Blue Is the Warmest Color” to Bruce Dern’s subtle portrayal of a man with a painful past in “Nebraska” and Channing Tatum‘s cameo in “This Is the End,” here are our choices for the best movie moments of the year.

The last scene in “Captain Phillips”:
Even those who were mixed on the movie sung the praises of Tom Hanks for his performance in the last 10 minutes of the movie, when the title character is in shock after being rescued. His wide-eyed, largely wordless reaction spoke volumes about the trauma he survived, and the woman who treated him was the perfect counterpart, which makes sense since she’s actually in the Navy. A harrowing ending to a gripping film. — Jeff Sneider

The first long sex scene in “Blue Is the Warmest Color”:
The movie is filled with carnal moments that fluctuate between delicious and harrowing. Director Abdellatif Kechiche adoringly and lasciviously watches his lead Adele Exarchopoulos eat on many occasions. The fights between his two lead actresses are wrought. The homophobia amongst some students at the fake school is infuriating. Yet if forced to single out anything from one of the year’s best movies, it’s the sex scene that had everyone at Cannes talking — and has sparked disputes between the director and his stars. — Lucas Shaw

The drunken bar scene in “The Heat”:
Sandra Bullock and Melissa McCarthy’s drunken dancing and inebriated bonding (above) in a Boston dive bar marks the comic high-point of the buddy cop film. The two stars are completely without vanity, whether they’re hitting on barflys or having fun with scotch tape. They take the material to the edge and beyond, as comedy should be. — Brent Lang

Woody Grant shows his family the broken home where he spent his childhood in “Nebraska”:
When Bruce Dern’s Woody Grant returns to the home where he grew up, now abandoned and dilapidated, he barely says a word — but his gaze says volumes about what he endured within those walls. Dern’s performance in the scene is heartbreaking, whether he’s wandering through his parents’ bedroom whispering how he would have been whipped if he’d been caught in there as a child, or responding to a question about whether he remembers his brother’s death by quietly offering, “I was there.” — Steve Pond

When Solomon Northup is nearly hung in “12 Years a Slave”:
Steve McQueen left the camera rolling just long enough to capture one of the most excruciating moments of the year when Solomon Northup (Chiwetel Ejijofor, above) is left hanging for hours with a noose around his neck, and just one foot barely touching the ground beneath him. The moment captured so much about the era that the film is trying to depict — the brutality of plantation life, the necessary indifference of other slaves, and Northup’s extraordinary will to live for the day he gets to see his family again. Above all, the painfully long take forces audiences to hang there with him, which is the closest most may come to experiencing the horrors of slavery themselves. — Greg Gilman

The moment Joaquin Phoenix‘s character meets his lovely, new personalized operating system in “Her”:
Spike Jonze’s odd tale of the relationship between a man and his operating system is filled with lovely moments, the most significant of which may come when Joaquin Phoenix’s character boots up his new, intuitive OS. A robotic male voice asks Phoenix a few questions (“Are you social or anti-social?” “How would you describe your relationship with your mother?”), an onscreen icon spins briefly, and then Scarlett Johansson’s voice comes out: “Hi, I’m Samantha.” And with that, the weirdest, most inventive and most touching love story of the year begins. — Steve Pond

Channing Tatum’s cameo in “This Is the End”:
There were too many hilarious moments to count in Seth Rogen and Evan Goldberg’s directorial debut, which was a raunchy send-up of the Rapture. But one of the most memorable featured the funniest cameo of the year — People Magazine’s Sexiest Man of 2012, Channing Tatum, pulling off a mask (above) to reveal he has become Danny McBride’s sex-slave gimp in order to survive in the post-apocalyptic wasteland that Los Angeles has become. — Greg Gilman

The sunrise at the beginning of “Gravity”:
The calm before the storm that sets Alfonso Cuarón’s space thriller into motion is a magnificent display of how far VFX have come since Stanley Kubrick’s “2001: A Space Odyssey” wowed audiences in 1968. George Clooney’s dialogue isn’t an exaggeration in the slightest when he watches in awe (see trailer moment above) as the sun begins illuminating planet Earth. “Beautiful, isn’t it?” Clooney says. “Terrific.” — Greg Gilman

Frances rejects Adam Driver’s character’s advances in “Frances Ha”:
During a tour of his apartment after their nice dinner out, Adam Driver’s character tries to make a move on Greta Gerwig’s Frances. His touch his cautious, considerate, but she makes an alarm sound that doesn’t translate to print. Her wordless shutdown defines their relationship from that second forward, and they decide to just be roommates. — Tim Molloy

Spock gets angry and beats Kahn’s butt in “Star Trek Into Darkness”:
At the height of the most satisfying character arcs of the year — in a tentpole studio movie, at least — Spock (Zachary Quinto) finally takes Captain Kirk’s advice and expresses his emotions just in time to teach Kahn (Bennedict Cumberbatch) that he’s not as invincible as he thinks he is. — Greg Gilman

Woody Grant’s triumphant joy ride in “Nebraska”:
Alexander Payne’s drama followed an aging father (Bruce Dern) and his son (Will Forte) road tripping through the midwest to claim a million dollar prize that doesn’t exist. While there are many gripping moments in the subtle black-and-white comedy, the most touching comes just before the credits roll as Dern’s character takes one last joy ride through his hometown and catches the eye of a former flame that burnt out a long, long time ago. As he drives by with a renewed sense of confidence, she gazes upon him as if replaying their entire romance in her head. There wasn’t a tear, a word, or even a wave — just a woman watching a man she used to love ride off into the sunset, and wondering what could have been. — Greg Gilman

Marcus’ rap in “Short Term 12”:
Keith Stanfield plays a character who often struggles to communicate with those around him. He alienates himself, often refusing help from those who want to give it. Yet when given the opportunity to express his pain in song, Marcus drops a devastating rap (above) that impugns his mother and steals the movie. — Lucas Shaw

When Mick Jagger and back-up singer Merry Clayton reflect on “Gimme Shelter” in “Twenty Feet From Stardom”:
The documentary suffers from some confused storytelling, but it earns a mention for the scene in which Mick Jagger and Merry Clayton, his galvanic duet partner on the 1969 song “Gimme Shelter,” sit in separate studios and listen to the original tapes of that scorching performance. Clayton remembers calling late at night and coming to the studio in curlers to blast out lines like “rape, murder, it’s just a shot away” — and when the playback ends 40-odd years later, Jagger can only smile and say, “bloody hell, that’s good.” — Steve Pond
The twist ending of “Safe Haven”:
The best so-bad-it’s-good twist ending of the year goes to this Nicholas Sparks romance novel adaptation, in which Julianne Hough stars as a woman on the run from an abusive husband who finds comfort in the arms of a widower played by Josh Duhamel, and confides in her new neighbor played by the Cobie Smulders. Turns out, the reason this neighbor has taken such a keen interest in Ms. Hough is because she’s the ghost of Duhamel’s dead wife. Crazy, right? No, really, it’s absolutely insane. — Greg Gilman