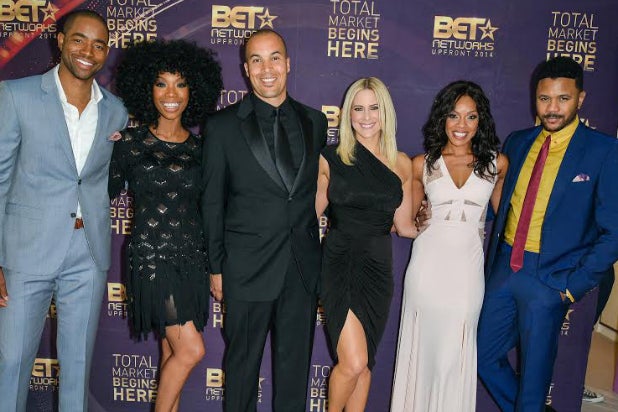 BET Networks announced three new series, its first miniseries, and the renewal of its hit “The Game.”

The miniseries, “The Book of Negroes,” is a  six-part epic about Aminata Diallo’s capture in Africa, enslavement in America, and emancipation in England. Based on the novel by Lawrence Hill, it stars Academy Award winners Cuba Gooding Jr. and Louis Gossett, Jr., as well as Aunjanue Ellis.

The new series are “The Start Up,” about a lifestyle blog, the musical competition “Gone Gospel,” and the dating show “Got Game.”

At its upfront presentation to advertisers Thursday, the network also boasted an especially good March. It reached more African-American adults 18-49 than any network in cable — and 9.8 million viewers. It received 19 NAACP Image Award nominations, more than any other network, cable or broadcast.

Here is the slate as described by the network:

THE START UP - In The Start Up, hip-hop prince Diggy Simmons makes his scripted series debut as Blake Monroe, founder of TheJetsetters.com, an entertainment and lifestyle blog. The Start Up hones in on what it means to be young, gifted and digital, as Blake and his friends strategize for fame and financing while they navigate the freedoms and pressures of adulthood. Also stars Teyana Taylor, Bria Murphy, Allen Maldonado, Chris Brew, and Stephanie Charles. From Executive Producers Mara Brock Akil, Salim Akil, Kenya Barris, James DuBose, Kevin Liles and Laurie Dobbins.

GONE GOSPEL – Music artists outside of the gospel genre in search of their next chapter and verse share a house, compete in weekly challenges and embark on a holistic journey to rebuild their careers.  Under the mentorship of star-making songwriters, producers and life coaches, the artists will write an inspirational anthem on their road to transforming their lives. There will be egos. There will be tribulations. And there will be a dramatic, victorious conclusion like nothing seen before on BET. Hosted  by Kirk Franklin (SundayBest); Executive Producers:  Marilyn Gill and Kirk Franklin.

GOT GAME – When eligible men and women have to woo a new prospect without relying on their great looks, killer body or fashion sense, it all comes down to whether they’ve Got Game? BET gives the dating show a cliffhanger with each episode as singles undergo wild transformations, complete with costumes and movie make-up before their big dates. Will their charm shine through? Or will it be game over? Hosted by Donnivin Jordan.

THE BOOK OF NEGROES - BET’s first-ever miniseries, this sweeping six-part epic traverses Aminata Diallo’s capture in Africa, enslavement in America, and emancipation in England. It is a riveting historical drama based upon the Commonwealth Prize winning novel by Lawrence Hill and chronicles love, loss, and the enduring human spirit. Stars Academy Award ® winners Cuba Gooding Jr. and Louis Gossett, Jr. and Aunjanue Ellis. In Partnership with eOne and The CBC.

Also read: Steve Burke: NBC Going Into Upfronts in Strongest Position in ‘Over a Decade’ (Update)

REAL HUSBANDS OF HOLLYWOOD: SEASON 3 – The fakest reality show ever is a real-life runaway hit. Taking the #1 spot on Entertainment Weekly’s must-see list and acclaimed by The New York Times, Real Husbands of Hollywood is the #1 cable sitcom among all adults 18-49.* Led by comic genius Kevin Hart with an all-star cast (Boris Kodjoe, Nelly, Nick Cannon, Duane Martin and Cynthia Kaye McWilliams), Season 3 will be sure to deliver new rivalries, A-list cameos, and laugh-out-loud cliffhangers.

THE GAME: SEASON 8 - In 2014, The Game swept both NAACP Image Awards for outstanding actress in a comedy series honors (Brandy Norwood and Wendy Raquel Robinson). The Game also delivered 4.4 million premiere night viewers, all waiting with bated breath for the answer to their big questions about Tasha, Kelly, Jason and Chardonnay. Season 8 promises to take this winning franchise to yet another level, so don’t miss out on the action, the comedy or the drama.

106 & PARK – 106 & Park is the #1 video countdown show anywhere on television. Now in its 14th year, our flagship program has been remixed and is bigger and bolder than ever. With multi-platinum artist and actor Bow Wow and Juno Award winning vocal sensation Keisha Chante in command of an interactive, state-of-the-art set, the new 106 & Park is the ultimate destination for the A-list of music, film, television, style, and sports. First Lady Michelle Obama chose the 106 & Park couch to drive home the value of higher education. Every weeknight, the show celebrates and reflects real youth culture as the home of the “livest audience,” delivering what’s hot and what’s next in pop culture.

BET AWARDS – The BET AWARDS franchise is the #1 Program in Cable Television History among the Black audience, and is still a top 10 awards show on television (Broadcast & Cable) among total viewers. It continues to hold the leadership position because it gathers the biggest stars in music, sports, Hollywood, and philanthropy – all on one stage – for one incredible night. Now in its 14th year and better than ever, The BET AWARDS delivers electrifying performances, moving tributes and the most unforgettable moments on TV.

BET HIP HOP AWARDS - The BET HIP HOP AWARDS returns for its 8th year to highlight who did it better in hip hop music, with bold performances and breakthrough freestyle cyphers that set social media on fire. This is the one show where the hottest rap stars of today share the stage with the hip hop icons of tomorrow. This show serves millions of people who love hip hop culture, which continues to define a generation and defy convention.

BLACK GIRLS ROCK - BLACK GIRLS ROCK! is the tribute show that became a movement. This timely and timeless special salutes dynamic leaders in entertainment, business, philanthropy and beyond. Featuring emerging and legendary talent, touching tributes to present day role models and soulful, surprising musical performances, BLACK GIRLS ROCK! celebrates the brilliance and beauty of women of color who shape our world and uplift our girls.

THE BET HONORS - The BET HONORS shows the world “what extraordinary looks like” by saluting luminaries whose lives and revolutionary work contribute to and elevate our culture. Airing during Black History Month, The BET HONORS is a shimmering night of dynamic performances and tributes that cross genres and generations.

Centric, BET Networks’ 24-hour music and entertainment network, inked an exclusive co-production deal with Queen Latifah‘s Flavor Unit Entertainment this month to produce new content for Centric. As part of the deal, BET Networks will develop and premiere an all-new Season 4 of the highly rated television series, Single Ladies, on Centric. The network will also air Seasons 1, 2 and 3. Flavor Unit Entertainment’s #1 new talk show, The Queen Latifah Show will also begin airing in primetime on Centric.  This new partnership strengthens Centric’s position as the network for the African American woman.

Centric’s popularity with African American audiences, most notably with African American women ages 25 to 54, continues to grow, with the network marking its most watched quarter in its history. For FY14 Q2 (Jan-Mar), Centric experienced its best quarter ever for Total Day and Primetime viewership, posting gains of +20 percent.

BEING – “Being” is a documentary series highlighting music and entertainment’s most dynamic figures – and a place where the stars tell their own stories, in their own words. Featuring never before seen photos, videos, and revealing interviews, “Being” delivers a compelling inside look at the inspiring lives of the biggest names in music, media and more.

ACCORDING TO HIM & HER – “According to Him & Her” approaches timely topics involving relationships, friendships, dating and sex in a “he said, she said” battle of the sexes. Every week an onslaught of comedians, relationship experts and surprise celebrities will engage in a series of questions resulting in a no-holds-barred banter giving audiences the opportunity to finally see how the other sex thinks from a comedic perspective.

SOUL TRAIN AWARDS – The Hippest Trip In America keeps grooving forward. The iconic brand that defined a generation returns for 2014 with its signature awards show. Featuring never before-seen musical collaborations and powerful tributes from world-class performers, the Soul Train Awards brings you the most revered and promising voices in soul and R&B.  The Soul Train Awards is simulcast on Centric and BET.

CENTRIC COMEDY ALL-STARS – Bill Bellamy will host the third annual comedy event, honoring an industry icon. Some of the top names in comedy, plus the hottest comedians on the rise will make appearances during the show that is sure to keep you laughing.