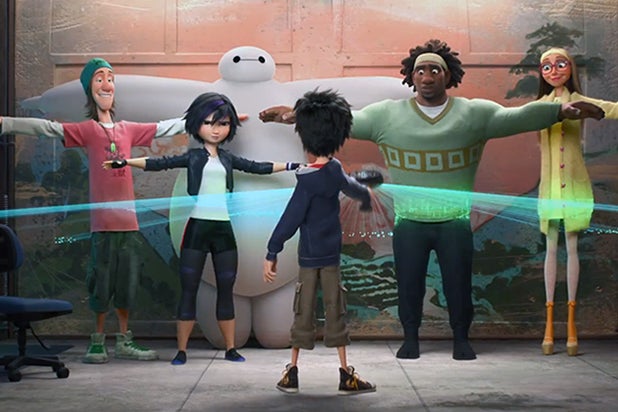 “Big Hero 6” certainly has the makings of another Disney classic.

Furthermore, the action-comedy-adventure, which includes voice work from Jamie Chung, T.J. Miller and Maya Rudolph, among others, scored well on the critic aggregating website Rotten Tomatoes with a 89 percent approval rating. But even with Disney films, there’s rarely a consensus.

“‘Big Hero 6’ offers spectacular visions, mixing a realistic sense of place and people with delirious flights of inter-dimensional heroic fancy, remaining true to its comic-book source (Pixar vets Robert L. Baird and Daniel Gerson loosely adapt the Marvel miniseries) without ever losing the human element among the larger-than-life finale,” he wrote in his review.

Slate’s critic Dana Stevens concurs. “The second best thing about ‘Big Hero 6’ is the animation design of the fictional city where it takes place, a sunnily futuristic mashup of San Francisco and Tokyo called San Fransokyo,” she wrote in her review.

“The Golden Gate Bridge (a frequent center of the action, most notably in one exhilarating scene of flight) is now topped by architectural flourishes like those on an ancient Japanese temple. Victorian houses and noodle stands line the whimsically imagined streets, above which twist interlocking elevated highways. Asian culture in ‘Big Hero 6’ isn’t just an exotic bit of stage décor but a constantly felt presence, right down to the half-Japanese, half-Anglo ethnicity of Hiro (very nicely voiced by Ryan Potter).”

Washington Post critic Michael O’Sullivan thinks a super-sized serving of heart is what separates “Big Hero 6” from other movies of its ilk.

“But the real appeal of ‘Big Hero 6’ isn’t its action. It’s the central character’s heart. That may sound strange, to talk about a movie that’s built around a robot in that way, but Baymax — like WALL-E and other amiable automatons — ultimately wins the day, not by overriding his inner Florence Nightingale, but by harnessing it,” he wrote.

ReelReviews’ James Berardinelli liked the film, but he definitely had his reservations.

“After immersion in the novel visual styles showcased in ‘The Boxtrolls’ and The Book of Life, the ‘standard’ approach used in ‘Big Hero 6’ feels a little … vanilla,” he wrote on his site.

“The backgrounds are eye-poppingly rendered – San Fransokyo looks great — but the foreground images occasionally lack sizzle,” he continued. “As for the 3D — call it ‘serviceable.’ The voice acting is solid but unremarkable, with Disney opting to use ‘character voices’ (for lack of a better term) than immediately recognizable, A-list talent. This has its advantages because familiar voices can overwhelm a character.”

The New York Post’s Kyle Smith was even less excited by the film.

“‘Big Hero 6’ is one of those Disney movies in which you can practically see the hot breath of the marketing guy condensed on the neck of the screenwriter,” he wrote in his review.

“Why does the villain wear a kabuki mask? ‘It’ll look cool on the action figure!’ Why is there a team of superfriends if they’re not going to do much of anything? ‘We need a full set of figurines for the Happy Meal,'” Smith continued.

“Despite painstaking effort to make this story of two siblings, Hiro (Ryan Potter) and Tadashi (Daniel Henney) as resonant as the one in ‘Frozen,’ ‘Big Hero 6’ is marred by slow development, bland characterizations, limp jokes and meaningless action scenes thrown in at random.”