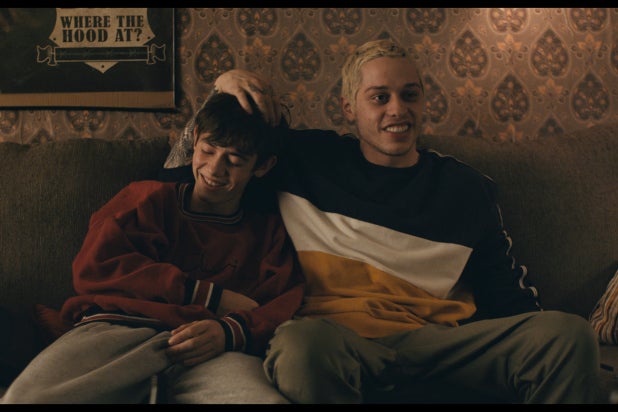 For a “Saturday Night Live” star who has yet to headline a major motion picture, Pete Davidson is impressively eager to tear down his own comic persona. Writer-director Jason Orley’s debut feature “Big Time Adolescence” is all about how Davidson’s relaxed, immature comic persona is undeniably charming but can also get real old, real fast.

That’s not a problem with the movie; that’s the whole point of it. “Big Time Adolescence” stars Griffin Gluck (“Tall Girl”) as Monroe “Mo” Harris, a teenager whose best friend is Zeke (Davidson), the older kid who lets him watch R-rated movies, taste beer for the first time, and look at nude pictures of girls on his phone. Or, as Mo calls it, “adult stuff.”

It’s been six years since Mo and Zeke first started hanging out, and now that Mo is at the ripe old age of 16, Zeke is introducing him to more “adult stuff” than ever. The question is, will Mo realize that Zeke is robbing Mo of his childhood, his ambition and his moral compass before it’s too late? Or for that matter, will Zeke?

It’s a testament to Orley’s understated writing and Davidson and Gluck’s naturalistic performances that “Big Time Adolescence” doesn’t play like a propagandistic scare film about bad influences and peer pressure. Zeke is no monster; he’s just been able to coast on charm his whole life, so he has never had to reconcile with actual consequences for any of his actions. He’s not manipulating Mo because he doesn’t care about him. He’s manipulating Mo because he cares about him very much and has absolutely no idea how to do that responsibly.

So when Mo asks Zeke to help him buy booze for a high-school party, Zeke agrees because it seems like a friendly, brotherly thing to do. Those kids are going to drink anyway, and Mo, who’s a bit of a wallflower, will be treated like the cool kid. And hey, you know what’s even cooler than bringing booze? Selling drugs. There ain’t nothing cooler than that, and they can make a pretty penny selling cheap weed to teenagers at a markup, because they have no idea how much it’s actually worth.

At no point does Orley’s film pause the conversation to highlight just how absolutely messed up Zeke and Mo’s relationship is. There’s no slow zoom on a joint, nor any peek behind the curtain to discover that Zeke’s consciously being manipulative. Mo’s parents, Reuben (Jon Cryer) and Sherri (Julia Murney), know that Zeke is a bad influence, but they have so much faith in Mo that they trust he’ll make the right choices. Watching them slowly discover that Mo is, like every other young person, susceptible to short-sighted decisions and self-centered behavior is genuinely sad.

Cryer carries most of the moral authority of “Big Time Adolescence” as a father who has no idea what exactly he’s doing wrong but knows he’s screwing up somehow. He even tries to appeal to Zeke’s self-interest by hiring him, sort of, as a babysitter in an effort to teach the burnout responsibility. But when all is said and done, he’s Mo’s father, trying to teach him important life lessons while flossing in the bathroom, and Zeke is an adult with a house full of cool dudes who drink a lot and give him dating advice which, almost, kinda, works.

It makes sense that Cryer, whose early career was full of roles that Pete Davidson would have been pretty good at (“Hiding Out” and “Superman IV: The Quest for Peace,” for instance) would play counterpoint to Davidson now. Cryer carries the weight of personal experience, ably balancing Davidson’s complete lack of wisdom, and their confrontation at the end of “Big Time Adolescence” feels impressively genuine for both actors.

To Orley’s credit, “Big Time Adolescence” deftly captures the insidiousness of pride and sloth, which present so many tiny opportunities for self-destruction that even a bright kid can fall prey to at least some of them. The affable, familial relationship Gluck and Davidson develop in the film skillfully hides all the red flags that would otherwise be spelled out in 50-feet neon letters, so the worst decisions in the world can get made as blithely as ordering a hamburger without pickles.

Unfortunately, that narrative subtlety comes with a downside: “Big Time Adolescence” just isn’t very funny. It’s supposed to amuse us when Mo and Zeke decide to culture themselves by going to a museum with their newfound drug money, and ask to buy one of the paintings. But there’s a difference between lacking introspection and having absolutely no idea how museums operate. The film’s big jokes look like they got lost on their way to a broader comedy, and the little jokes are so completely intertwined with the tragedy of Orley’s screenplay that they’re usually more bittersweet than hilarious.

Toss in in a restrained filmmaking aesthetic, largely courtesy of immersive and understated cinematography by Andrew Huebscher (“The Taking of Deborah Logan”), and “Big Time Adolescence” eventually falls right back into the “After-School Special” territory from which it otherwise seemed eager to escape. Orley’s film isn’t terribly funny, its drama is muted, and its efforts at romance are, quite intentionally, thwarted. So all that’s left to latch onto is the moral dilemma, and the moral dilemma is pretty straightforward if you’re not Zeke or Mo, which we aren’t.

It’s impressive to see Orley mask the shiny simplicity of “Big Time Adolescence” in finely-calibrated performances and observant, mostly realistic dialogue, but the disguise falls apart after a while. The bad influence is bad, the good influence is good, and Mo learns pretty much what we always assumed he’d learn from the beginning. Along the way we get some lovely and strong performances, but the journey seems less important than the destination, and the destination is pre-ordained.

Well, it looks like the romance of the summer has ended along with the season. TMZ reported that Ariana Grande and Pete Davidson have called off their engagement and split up. We were rooting for you guys! Among the assets they'll maybe have to divide are the tattoos they got in tribute to each other. Luckily, they don't have to keep them if they don't want to.