It was all anybody wanted to discuss backstage with "The Hurt Locker" crew: Kathryn Bigelow, first woman to win an Oscar for directing.

One reporter said Bigelow had been reluctant to call herself a female director, asking, "Are you ready to say that now at this historic moment?"

Bigelow replied, "First of all, I hope I’m the first of many. And of course I’d love to just think of myself as a filmmaker, and I wait for the day when the modifier can be a moot point.

"But I’m very grateful if I can inspire some young, intrepid, tenacious male or female filmmakers and make them feel that the impossible is possible," she added. 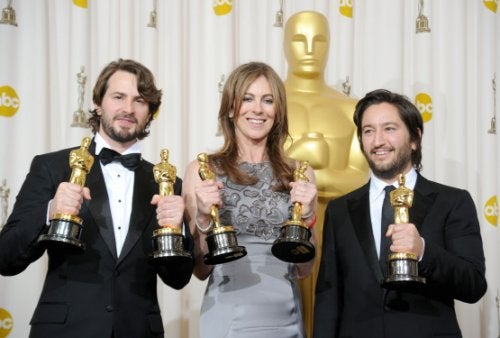 Asked when she began to hope that people’s interest in "Hurt Locker" might translate to awards, Bigelow said, "I don’t think I ever dared to hope. But I will say that what was extraordinary was the love from the critical community. And that was like wind in our sails, and it created momentum that would not stop. And I hope somehow that the critical community would know how much we appreciate it."

Of winning against her ex-husband James Cameron, Bigelow said, "I think he’s an extraordinary filmmaker. I have to say all the nomineess are phenomenal, powerful, talented filmmakers. And what an honor, and how humbling for me — it was humbling to be in that conversatioin. So I have to say that it’s a humbling experience."

Asked what she will tell Cameron, she said, "’You left me speechless.’"

"I think Jim is very inspiring," she added. "I think he inspires filmmakers around the world. And for that, I think I could speak for all of them, we are quite grateful."

Continuing the trend of backstage questioners seeking advice, Bigelow gestured to screenwriter Mark Boal (at left) and said, "I would not be here except for this gentleman, who wrote a very courageous and beautiful screenplay. I would say, and I don’t mean it to sound simple, to never give up on your dream.

"I’ve been making films for a while. Only about 30 years. So when I say don’t give up, I mean it. …. Work on stories you really, truly believe in, because then no obstacle is too great."

Boal opined: "The Academy Awards are the pinnacle for the filmmaking community. Obviously we already feel so grateful for the journey that we’ve had, just to be up there. We are reminded every day of how many filmmakers don’t get their movies made, every day. … We look forwrd to more people seeing the film, but it’s been a fabulous ride already."

Greg Shapiro, one of the film’s producers, was asked if they had spoken to fellow producer Nicolas Chartier, who was

banned from the Oscar ceremonies

because he sent vote-soliciting emails. "We haven’t spoken to him yet. He spent me a very beautiful email, he’s very excited. He had a party thrown for him. And I think he’s very pleased."