Comedian Bill Burr joined Conan O’Brien’s farewell tour on Thursday with some hot takes that might get the TBS late-night host canceled if he weren’t already ending his talk show.

For starters, the two discussed a conspiracy theory that has gained some steam among anti-vaxxers, that the government is secretly trying to kill people through the COVID-19 inoculations. The goal, in this theory, would be population control as the Earth’s natural resources diminish.

“That doesn’t make any sense,” Burr said. “They would be killing all what [conspiracy theorists] call ‘the sheeple.’ So all the people that go, ‘What are we supposed to do? OK!’ They’re gonna kill all of us and then just be left with all the Fonzies with their leather jackets who are too cool to listen to people? They got a nightmare. Who’s gonna dig their ditches for ‘em?” 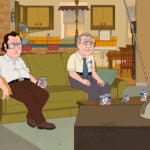 “So maybe they vaxxed us sheeple so then they could have a second [version of COVID] come out to kill all the cool people that hit a jukebox and it turns on,” he added.

“We’re a couple of Ron Howards,” Burr said, referring to himself and Conan.

Both redheads kind of resemble Richie Cunningham, though Burr was wearing something pretty close to a letterman sweater last night while Conan ironically did have a leather jacket on. 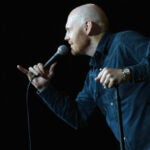 Thanks to the Google-me-right aspect of the internet, Burr says he no longer listens to anyone’s theories unless they pass a simple test: “Did you get this information at the library?”

He’s also looking at you with that one, flat-Earthers. 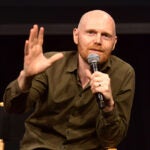 Also Read:
Bill Burr Calls Out ‘Rats’ Who Got Shane Gillis Fired From ‘SNL': ‘All They Want to Do Is Get People in Trouble’ (Video)

“I love those people,” he said. “Don’t wear it. Don’t wear it. Go kill yourself. That’s awesome. Because I have to be honest with you: I know a lot of people died from COVID, but I’m starting to see the traffic come back and I selfishly thought, ‘I wished it killed a few more.'”

Specifically, “people I don’t know or love, that I would never miss,” Burr explained. 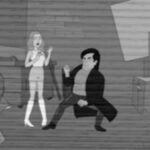