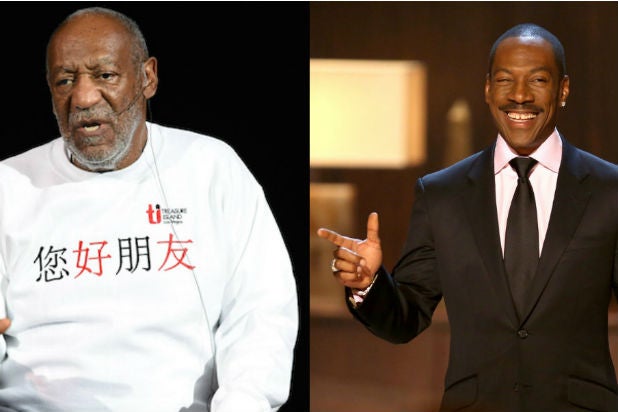 “I am very appreciative of Eddie, and I applaud his actions,” Cosby said through a spokesperson, NBC News reported.

According to Macdonald, who co-wrote the skit, Murphy entertained the idea of portraying Cosby at first. Murphy changed his mind the day before, saying he felt “uncomfortable.”

“He knew the laughs would bring the house down,” Macdonald tweeted. But, he added, Murphy decided “the laughs are not worth it. He will not kick a man when he is down.”

Instead, current SNL member Kenan Thompson filled in to portray Cosby alongside Will Ferrell, Macdonald, Darrell Hammond and Kate McKinnon.

Before Sunday, Cosby has made headlines since last fall and faced backlash after roughly 30 women came forward with accusations of drugging and sexual misconduct over the last four decades. The fallout cost Cosby a comedy NBC was developing for the comedian as a starring vehicle. Also, Netflix postponed a special that would have starred the comedian and was intended to premiere over the 2014 Thanksgiving holiday.

Cosby’s attorney Marty Singer has not yet responded to TheWrap’s request for comment about the latest allegations.

But in a previously released a statement, he said: “The new, never-before-heard claims from women who have come forward in the past two weeks with unsubstantiated, fantastical stories about things they say occurred 30, 40, or even 50 years ago have escalated far past the point of absurdity.”

See below for more of Macdonald’s tweets on Murphy’s decision:

Eddie Murphy, I realize, is not like the rest of us. Eddie does not need the laughs.

Eddie Murphy is the coolest, a rockstar even in a room with actual rockstars. — Norm Macdonald (@normmacdonald) February 19, 2015