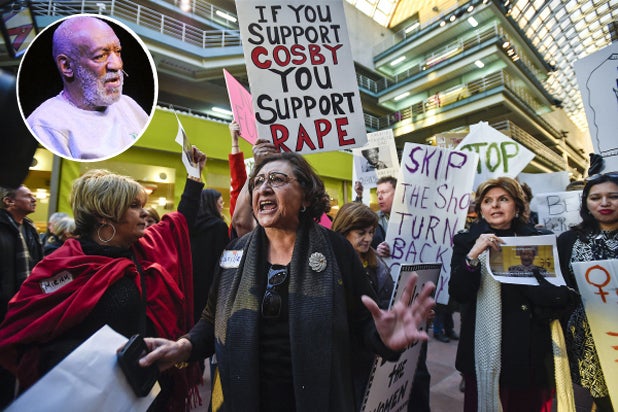 AEG Live will refund nearly 40 percent of ticket sales for Bill Cosby‘s two Saturday, Jan. 17, Denver performances, which were protested by a group organized in advance by lawyer Gloria Allred. Allred represents seven women who have come forward with accusations of sexual misconduct by the comedian.

“Refunds were for people who requested in advance of the shows’ play,” AEG Live marketing director Sara Williams told TheWrap.

The returns amount to 1,200 out of the 3,100 tickets sold — or 38.7 percent — for the performance at the Buell Theatre, according to Kent Rice, executive director of Arts & Venues for Denver, The Denver Post reported.

The theatre holds 2,884 people per show, so Cosby’s performances could have had an audience of 5,768. The Denver audience welcomed Cosby, despite up to 100 protesters chanting “No means no!”  and “Rape is not a joke!” outside, according to the Post.

Despite delays, refunds will be provided.

“You call up, and the initial word isn’t, ‘Here’s your money,’ so they think they’re never going to get them,” Williams told the Post. “But they are.”

Since last fall, nearly 30 women have come forward claiming the comedian either drugged them, sexually assaulted them, or both over the last few decades, TheWrap previously reported. Amid the mounting allegations, Cosby’s lawyer Martin Singer previously released a statement saying: “The new, never-before-heard claims from women who have come forward in the past two weeks with unsubstantiated, fantastical stories about things they say occurred 30, 40, or even 50 years ago have escalated far past the point of absurdity.”

Cosby, meanwhile, has suffered career blowback in the wake of the allegations, with NBC dumping a comedy that it was developing for the comedian as a starring vehicle and Netflix postponing a special that would have starred Cosby and was intended to premiere over the 2014 Thanksgiving holiday.