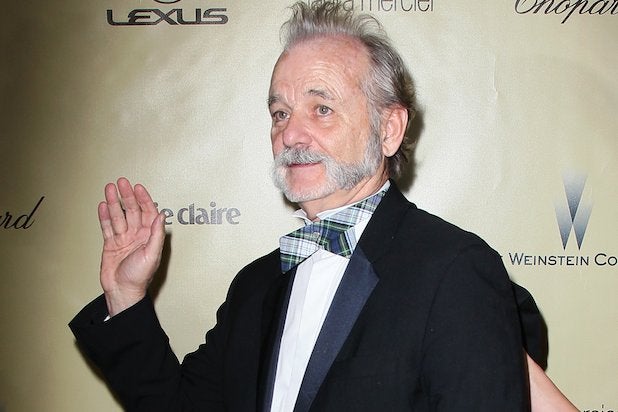 Bill Murray has given his highest fans the OK to keep toking away and endorsed the recreational use of marijuana during a recent Reddit AMA session.

The former “Saturday Night Live” cast member recognized the “failure” of the government’s expensive War on Drugs while promoting his latest film, “Monuments Men,” in which he plays one of seven unlikely soldiers tasked with rescuing artistic masterpieces from Nazi thieves during World War II.

Also read: Benedict Cumberbatch Reveals All on Reddit: 10 Things We Learned About the ‘Sherlock’ Star

Pot wasn’t the only thing on Murray’s mind, though. The elusive actor opened up about why he agreed to make “Garfield,” the disappointing critical reception of “Groundhog Day,” and even debunked a strange story about him that has been floating around for years.

Starting with his stance on the legalization of a certain Schedule 1 controlled substance, here are 10 things we learned about prolific comedian.

1. Here’s how Murray feels about legalizing marijuana for recreational use.

Well that’s a large question, isn’t it? Because you’re talking about recreation, which everyone is in favor of. You are also talking about something that has been illegal for so many years, and marijuana is responsible for such a large part of the prison population, for the crime of self-medication. And it takes millions and billions of dollars by incarcerating people for this crime against oneself as best can be determined. People are realizing that the war on drugs is a failure, that the amount of money spent, you could have bought all the drugs with that much money rather than create this army of people and incarcerated people. I think the terror of marijuana was probably overstated. I don’t think people are really concerned about it the way they once were. Now that we have crack and crystal and whatnot, people don’t even think about marijuana anymore, it’s like someone watching too many videogames in comparison. The fact that states are passing laws allowing it means that its threat has been over-exagerated. Psychologists recommend smoking marijuana rather than drinking if you are in a stressful situation. These are ancient remedies, alcohol and smoking, and they only started passing laws against them 100 years ago.

In the hunt for the art, they found hidden in the salt mines where the art was hidden, they found the ENTIRE gold supply of Germany.

Is that surprising? I think it’s one of those odd, bizarre facts where you have this dinky group of guys looking for an art heist effectively ends the war in one fell swoop cutting the arteries of the economy.

3. Murray agreed to voice the titular fat cat in “Garfield” only because he thought one of the Coen Brothers, Joel, had written the screenplay, but it was actually Joel Cohen (“Cheaper By the Dozen”).

“I had a hilarious experience with Garfield. I only read a few pages of it, and I kind of wanted to do a cartoon movie, because I had looked at the screenplay and it said “Joel Cohen” on it.

And I wasn’t thinking clearly, but it was spelled Cohen, not Coen. I love the Coen brothers movies. I think that Joel Coen is a wonderful comedic mind. So I didn’t really bother to finish the script, I thought ‘he’s great, I’ll do it.'”

4. If Murray could go back in time and have one conversation with one person, he would have a nice chat with the founder of genetics, Gregor Mendel.

“I kind of like scientists, in a funny way. Albert Einstein was a pretty cool guy. The thing about Einstein was that he was a theoretical physicist, so they were all theories. He was just a smart guy. I’m kind of interested in genetics though. I think I would have liked to have met Gregor Mendel.

Because he was a monk who just sort of figured this stuff out on his own. That’s a higher mind, that’s a mind that’s connected. They have a vision, and they just sort of see it because they are so connected intellectually and mechanically and spiritually, they can access a higher mind. Mendel was a guy so long ago that I don’t necessarily know very much about him, but I know that Einstein did his work in the mountains in Switzerland. I think the altitude had an effect on the way they spoke and thought.

But I would like to know about Mendel, because i remember going to the Philippines and thinking ‘this is like Mendel’s garden’ because it had been invaded by so many different countries over the years, and you could see the children shared the genetic traits of all their invaders over the years, and it made for this beautiful varietal garden.”

5. Director Jim Jarmusch’s 2005 drama”Broken Flowers” was Murray’s “most fun” movie to act in, and he didn’t think he could ever top the movie once he saw it.

“Someone asked “what movie was the most fun to act in” and deleted their comment, so here goes:

Well, I did a film with Jim Jarmusch called Broken Flowers, but I really enjoyed that movie. I enjoyed the script that he wrote. He asked me if I could do a movie, and I said “I gotta stay home, but if you make a movie that i could shoot within one hour of my house, I’ll do it.”

So he found those locations. And I did the movie.

“The oddest… well, I was eating at a sushi bar. I would go to sushi bars with a book I had called “Making out in Japanese.” it was a small paperback book, with questions like “can we get into the back seat?” “do your parents know about me?” “do you have a curfew?”

And I would say to the sushi chef “Do you have a curfew? Do your parents know about us? And can we get into the back seat?”

And I would always have a lot of fun with that, but that one particular day, he said “would you like some fresh eel?” and I said “yes I would.” so he came back with a fresh eel, a live eel, and then he walked back behind a screen and came back in 10 seconds with a no-longer-alive eel. It was the freshest thing I had ever eaten in my life. It was such a funny moment to see something that was alive that no longer was alive, that was my food, in 30 seconds.”

7. Murray thinks the current cast of “Saturday Night Live” is “good,” but Kristen Wiig‘s cast was Murray’s favorite since the original cast.

“They’re good. I don’t know them as well as I knew the previous one. But i really feel like the previous cast, that was the best group since the original group. They were my favorite group. Some really talented people that were all comedians of some kind or another. You think about Dana Carvey, Will, Hartman, all these wonderful funny guys. But the last group with Kristen Wiig and those characters, they were a bunch of actors and their stuff was just different. It’s all about the writing, the writing is such a challenge and you are trying to write backwards to fit 90 minutes between dress rehearsal and the airing. And sometimes the writers don’t get the whole thing figured out, it’s not like a play where you can rehearse it several times. So good actors – and those were really good actors, and there are some great actors in this current group as well I might add – they seem to be able to solve writing problems, improvisational actors, can solve them on their feet. They can solve it during the performance, and make a scene work. It’s not like we were improvising when we made the shows, but you could feel ways to make things better. And when you get into the third dimension, as opposed to the printed page, you can see ways to solve things and write things live that other sorts of professionals don’t necessarily have. And that’s why I like that previous group. So this group, there are definitely some actors in this group, I see them working in the same way and making scenes go. They really roll very nicely, they have great momentum, and it seems like they are calm in the moment.

Does that make sense?”

“Well, that part was fine, the filming of the scenes over and over because you know that’s what the story is. The scripts is one of the greatest conceptual scripts I’ve ever seen. It’s a script that was so unique, so original, and yet it got not acclaim. To me it was no question that it was the greatest script of the year. To this day people are talking about it, but they forget no one paid any attention to it at the time. The execution of the script, there were great people in it. It was a difficult movie to shoot because we shot in winter outdoors. If you ever get to go to Puxatawney, you should go, it is one of the few things that is BETTER than advertised. It’s really something to see. But doing the movie, shooting the scenes over and over, it’s like an acting challenge. It’s like doing a play and those same scenes over and over and again, so you can try to make it better or deeper or funnier than you made it previously.”

9. There is a story floating around that Murray randomly approached a stranger, stole a french fry, then left after saying, “No one will believe you.” Is this fact or fiction?

“Well I have no idea what you’re talking about.”

10. What does Murray whisper in Scarlett Johansson‘s ear at the end of  “Lost In Translation?”