The first thing Keanu Reeves said to me when we sat down to do an interview on the Phoenix set of “Bill & Ted’s Excellent Adventure” in April 1987 was simple.

“If I’m really boring, just print anything you want,” he said. “Make it interesting.”

In fact, I didn’t print anything — not because he was boring, but because I wasn’t in Phoenix 33 years ago to write about Reeves and his co-star, Alex Winter. At that point, the two actors weren’t very well known, and the movie itself was years away from becoming a cult hit that spawned two sequels, including the new “Bill & Ted Face the Music.”

Rolling Stone had sent me to Phoenix to cover the opening-night show on U2’s tour to promote the band’s breakthrough album, “The Joshua Tree.” But a friend of mine was the unit publicist on “Bill & Ted,” and another friend was playing Joan of Arc in the movie. With a little persuasion but no assignment to write about the film, I decided to spend a couple extra days in Phoenix and check out the odd little comedy about time-traveling teens that was in the final stages of shooting under director Stephen Herek. 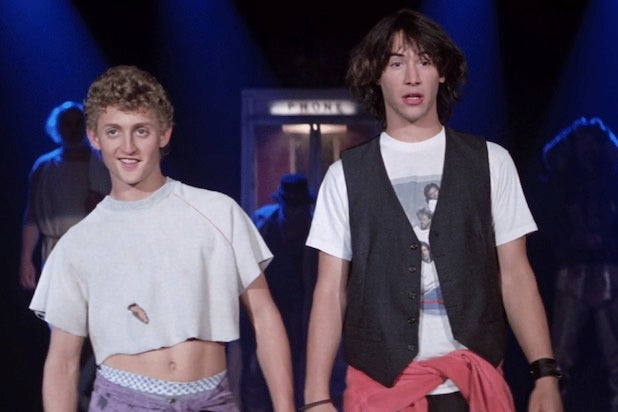 I spent that time on the set of the movie, which at that point was well into night shoots that were kept highly entertaining because of the two young actors’ penchant for slipping into the Bill and Ted characters both on and off camera. (As I recall, the film’s writers, Chris Matheson and Ed Solomon, were pretty good at becoming the characters as well.)

As a favor to my publicist friend, I interviewed Winter and Reeves, in what were certainly among the first interviews that either actor had done about the movie. But because I wasn’t there on assignment, and because the movie only became a sleeper hit when it was released two years later, the interviews never ran — not then, and not when Reeves went on to become a big movie star and Winter became a director and prolific documentary filmmaker whose films include “Napster,” “Showbiz Kids” and the upcoming “Zappa.”

But with the third “Bill & Ted” movie about to be released, and with Winter and Reeves reuniting as the San Dimas metalhead goofballs after a 19-year hiatus, I went in search of old interview tapes that I have stashed at the back of a storage closet. And within about five minutes, I found an old TDK cassette with “BILL + TED” written on the label.

I did separate interviews with the two actors; as I recall, I talked to Reeves, who at the time was 22, at an outdoor table during a dinner break, and Winter, 21, inside one of the classrooms at the high school that was doubling for the movie’s Sam Dimas High, because at the time Arizona was offering better production incentives than California. (The full interviews can be found on WrapPRO.)

Reeves explained that he landed the role of Ted “Theodore” Logan through a mostly normal audition process. “There was one extraordinary event that occurred,” he said, “in that the last audition was seven hours long. It was like a revolving door with partners. They were just matching people up.”

Winter, who was cast as Bill S. Preston, Esq., later detailed the ways in which they agreed. “It was a little bit bigger in the auditions, because it’s sort of theatrical and we’re both mainly theater people,” he said. “We were sort of into this commedia del arte style — hands up in the air, eyes real big. It got kind of toned down a bit, but it’s essentially the same character.” 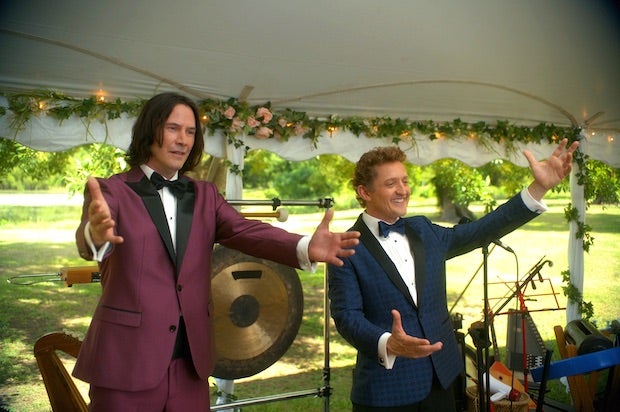 Winter and Reeves also both felt that the characters of Bill and Ted, goodhearted but clueless teens who were mostly devoted to their fledgling rock band, Wyld Stallyns, were a far cry from the most famous teen character of the early ’80s, the stoner Jeff Spicoli played by Sean Penn in 1982’s “Fast Times at Ridgemont High.”

“A lot of people who read the script, agents and things, came to me and said, ‘It’s a film about …’ and it wasn’t anything like how I saw the characters,” Winter said. “They described them as these sort of surfer, Spicoli characters, and that wasn’t how I read it. They’re not stoners at all. They’re just very innocent and naïve — almost the opposite of a drugged-out Spicoli.”

For his part, Reeves said, “I’m playing, like, a child of the universe. A babe in the woods. An insouciant young man. … He’s not the wittiest guy and not the smartest. You know, you wouldn’t want to talk about quantum theories and stuff like that. But I can’t talk about that either.”

Reeves frowned when I asked how long he had been acting. “Well… I don’t know if I’m acting now,” he said. “I’m pretty bad.” Pause. “I mean, I’m OK, but I hate acting most of the time that I do it.” The future star sidestepped whether he’d pursue another line of work. “I have other interests,” he said, “but none as all-consuming as this godawful job.”

The oft-jeered actor has appeared in several films with far-fetched plots, including ”John Wick“ which opens Oct. 24