TheWrap magazine: ”The pressure we put on ourselves was pretty crazy,“ says Eilish of writing the Grammy-winning song for ”No Time to Die“ with her brother Finneas

A version of this story about Billie Eilish and “No Time to Die” first appeared in the Race Begins issue of TheWrap’s awards magazine.

Billie Eilish may be known for the hushed intimacy of albums like “When We All Fall Asleep, Where Do We Go?” and “Happier Than Ever,” but she and her brother, producer and co-writer, Finneas O’Connell (who records and works under his first name only), have long harbored a grand, bold ambition.

“We made it known to our team that the tippy-top of our dreams was getting to do a Bond song,” Finneas said. “Our whole lives, we would write a little melody and think, ‘Oh, that’s kind of Bond.’”

Their dream was realized with “No Time to Die,” their theme to the 25th James Bond movie, and the last one starring Daniel Craig as Agent 007 — and a song that somehow merges the intimacy of Eilish’s music with the bravado of Bond. And it made sense that their song serenaded Craig’s version of Bond – because they’re young enough to have grown up with him as their 007.

“I feel like our adolescence was marked by the Daniel Craig series of films,” Finneas said. “When ‘Casino Royale’ came out in 2006 (when Eilish was about to turn 5 and Finneas was 9), that was our defining Bond.” 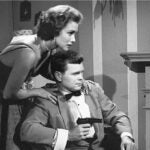 But after a half-hour meeting with Bond producer Barbara Broccoli backstage following a show in Ireland, Eilish and Finneas didn’t get an outright assignment; instead, they were given the pre-credits pages of the “No Time to Die” script and invited to submit a song, with the understanding that a decision would only be made after the producers heard it.

“The pressure that we put on ourselves was pretty crazy,” Eilish said. “It wasn’t anybody else doing it, it was us wanting to make a good song and not take away from all of the amazing music that came before.”

They had their own prerequisites for the song: The title had to be the name of the movie, the song had to be about the characters in that particular movie, and it needed to include at least a few touches of familiar Bond music. “There was some performance anxiety, for sure,” Finneas said. “Can we write something good enough? We were sitting there looking at the piano and thinking, ‘What am I going to come up with that’s going to live up to this iconic franchise and this history of songs by Adele and Paul McCartney and Shirley Bassey?’”

The turning point in the writing, Eilish said, was when Finneas came up with the opening piano riff, and the melody and hook followed. “It’s a big assignment to put on yourself, especially when you want it to be the best song that you’ve ever made,” she said. “But I feel that we made a song that was exactly what we wanted.”

Another of their Bond-song must-haves was a moment when Eilish would do something completely out of character for her: rear back and belt out a few lines in her best Shirley Bassey manner. “I hadn’t done anything like that,” she said. “I was really, really stepping out of my comfort zone, and I was very scared, but we knew that we needed the belt or the song wouldn’t work.” 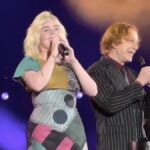 They tried it in the tour bus between shows in Texas, sitting on their bunks in the dark, and it didn’t work. They tried it again in a hotel room without success. Finally, she stood in the middle of Finneas’ living room with a hand-held microphone and nailed it. “I was just shouting,” she said. “We laughed, because the neighbors were definitely bummed by it.”

After an all-night mixing session, they got the song to the Bond producers. “I just had a feeling that we got the job,” Finneas said – which was good, because if it had been turned down the song would probably never have come out. “Because of all the factors involved, including the title of the song and the fact that it’s not a song about Billie or me, I doubt it ever would have come out,” he said.

The song went through three different attempts at orchestrations, and then Finneas found himself with all three on a hard drive. “I thought, ‘Whoa, am I allowed to have this stuff?’” he said. “But I took the files of all three orchestrations and muted most of it. I left in some cool moments but took out all the stuff that was too complicated or hid the vocal. And then I sent it in, thinking, ‘There is no way we’re going to get away with this.’ But (composer) Hans (Zimmer) wrote back and said, ‘Love it, it sounds great.’”

When the movie was delayed by the pandemic, Eilish released the song and won a Grammy for it – but she and Finneas didn’t get to see it actually cut into the movie until months later, during the late-September premiere at the Royal Albert Hall in London. “Billie and I were elbowing each other for most of that movie,” Finneas said. “I mean, it’s another incredible thing crossed off the bucket list.”

For her part, Eilish did her best to enjoy the experience as well. “When I was on the red carpet answering questions, I felt like I’m not even supposed to be there,” she said. “I still feel like I don’t deserve it, really. But I’m also incredibly grateful and happy, and I think it’s the coolest thing in the world.”