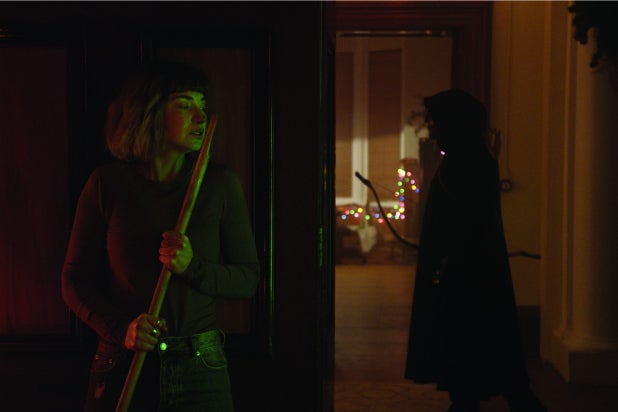 Last year, Blumhouse Productions founder Jason Blum got in a little trouble when it was discovered that none of the horror movies at his shingle had been directed by women — because, he said, “There are not a lot of female directors period, and even less who are inclined to do horror.”

After the inevitable backlash, he apologized with swift sincerity. Now he seems to be presenting “Black Christmas” as both penance and an amend.

Directed by indie auteur Sophia Takal (“Always Shine”), this burn-the-house-down remake really belongs in the midnight-movie section of a festival like Sundance or SXSW. As a wide release studio film nominally aimed at a multiplex audience, it feels strangely, if intriguingly, out of step.

In 1974, the original “Black Christmas” earned its place in pop culture as an early influence on future slasher flicks (and every consequent call that came from inside the house). But despite its cult reputation and OG status, it was actually a fairly ordinary bit of nasty business in which sorority sisters are picked off one by one. (There was also a 2006 remake, which has been justly forgotten.)

Takal, who cowrote the script with April Wolfe (up until recently, a critic for this site), takes such a divergent approach it’s curious that she didn’t just start fresh. The trailer notoriously exposed the primary spoilers, but without repeating them here, it’s enough to say this version goes in an entirely different direction.

This is true not only structurally but thematically, with Takal upending helpless-heroine stereotypes by turning the movie into a modern #MeToo tale. Her protagonist, Riley (Imogen Poots), is a senior at fictional Hawthorne College, and still suffering flashbacks from the night she was drugged and raped three years earlier by a villainous older frat boy. He’s returned to campus for a pledge initiation, which may or may not prove coincidental when Riley and her sorority sisters start receiving menacing texts.

Kris (Aleyse Shannon, “Charmed”) has made herself a particular target, due to her passionate activism: she pushed the school to remove a bust of Hawthorne’s beloved but racist founder, and she’s trying to get their beloved but misogynistic English professor (Cary Elwes) fired. Even so, she and Riley aren’t the only victims: Marty (Lily Donoghue, “Dirty John”), Jess (Brittany O’Grady, “Star”) and Helena (Madeleine Adams) are getting threatening messages, too. Before long, their tormenters start graduating from texts to attacks. The question is, Can the bonds of sisterhood overpower toxic masculinity?

If you’re intrigued to hear that Riki Lindhome of Garfunkel and Oates has refashioned “Up on the Housetop” into a jaw-dropping rape-culture callout, this is the movie for you. But if you’re not, well, you might not find enough to compensate for the clunky editing, undistinguished staging, and overall embrace of genre clichés. (Don’t go in the dark attic! Or down the empty hallway! Or to the dopey campus security guard instead of the actual police!)

Also Read: Everything You Need to Know About The Crazy 'Last Christmas' Twist Ending, Explained

For genre fans, none of those flaws might matter as much if the horror was creatively approached. Technically, it isn’t; the PG-13 rating means many of the murders happen either off-screen or with little gore.

It’s clear that Takal has other things on her mind entirely, which gives the movie an interesting urgency all the way through. But ultimately she can’t overcome that push-pull tension — she’s revisiting a movie she doesn’t seem to care for, when what she really wants is to create a groundbreaking feminist horror film for the #MeToo era.

Perhaps as a result, the script is often so literal and heavy-handed that it can feel weirdly behind the times. It seems to exist in a world without “Scream” or “Jennifer’s Body” or “Veronica Mars,” the latter of which addressed all of this movie’s themes and many of its plotlines with indelible intelligence and depth.

That’s not to say the genre isn’t still in need of a serious corrective, or even that “Black Christmas” isn’t a valuable part of that corrective. There’s always a thrill in seeing artists reject the obvious path, or chase their passions with single-minded abandon. Takal and Wolfe are utterly sincere in their idealism, and it is a definite step forward to watch women — still so often considered inevitable victims in horror — fight back with ferocity.

It’s also obvious that they’ve done their homework, which allows them to tweak the original’s most iconic moments, as well as its more obvious tropes. And they work hard to showcase their admirably strong central cast. Poots makes for a likable heroine, Shannon has the charisma of a natural star, and Caleb Eberhardt (“The Deuce”) is charming as Riley’s awkward crush. Though there’s not enough of him, Elwes is a welcome presence whenever he appears, seeming delighted to show off an amusingly ridiculous posh accent.