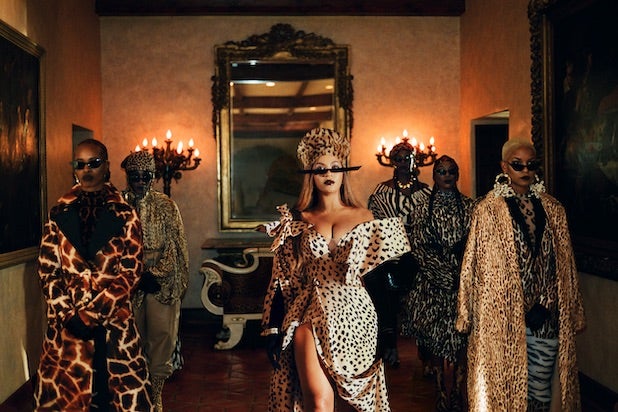 The idea behind the film “Black Is King,” which premiered on Disney+ on July 31, is “to shift the global perception of the word Black,” according to its director and star, Beyoncé. (Or is that Beyoncé Knowles-Carter? She takes the last name for her director’s credit, but goes first-name only for her starring credit.)

But it’s unlikely that too many fans will flock to Disney+ for altered semantics. Yes, “Black Is King” is an extravagant piece of empowerment, a riff on “The Lion King” that is set in Africa and continually points to the beauty and power of the Black experience. But this visual feast based on Beyoncé’s 2019 album “The Lion King: The Gift” finds its moments of glory in the strength of its images, which are more arresting than the story or the subtext.

And if the idea of “Black Is King” is to uncover something new in the concept of Blackness, it is also to restate something about Beyoncé herself — namely, that anything she tackles will be special. She released a visual album in 2016, “Lemonade,” and it was a landmark that won rave reviews and a Peabody Award. She played Coachella in 2018, structuring a show around the concept of historically Black colleges and universities, and it was perhaps the most acclaimed show in that festival’s history, with an accompanying documentary that landed her an Emmy nomination as a director.

Also Read: Adele Dancing Along to Beyoncé's Coachella Set Is the Fan in All of Us

And after playing a voice role in the photorealistic remake of “The Lion King,” she wasn’t content to provide the voice of Nala and write a new song, “Spirit,” for the soundtrack. Instead, she produced and curated an Afro-pop album, “The Lion King: The Gift,” that reinterpreted the film’s storyline and included performances from Kendrick Lamar, Jay-Z and Childish Gambino, along with a number of African musicians and many members of the “Lion King” voice cast.

That album is the basis of “Black Is King,” which slightly shuffles its songs and adds a few new touches, notably the celebratory and defiant new song “Black Parade.” Unlike the album, though, the movie explicitly sets this story in the human rather than the African world: While it pulls snatches of dialogue from the 2019 movie, its story follows a young prince who is forced to leave his kingdom, only to return in triumph at the end.

That story comes through in bits and pieces, but it grows increasingly incidental as “Black Is King” goes on. The film is all about the music and the visuals, from the moment a camera swoops over the waves and locates Beyoncé in a flowing white dress standing regally on the beach.

“If you feel insignificant/You better think again,” she sings at the beginning of the first song, “Bigger,” but who could feel insignificant in this setting? The locations are wildly varied, from African deserts and plains to opulent interiors, and the clothes are absurdly glamorous because that’s the point. The template is set early: Beyoncé sings, where she is and what she’s wearing changes every couple of bars, and the audience gets a lavish, fast-paced tour of the rich visual and musical traditions of the African continent.

The ties to “The Lion King” occasionally ground the story in that familiar coming-of-age story, but they just as often feel beside the point: When the young prince is taken to a enormous mansion where Jay-Z drives a leopard-print Rolls Royce and Beyoncé cavorts to the extravagant “Mood 4 Eva,” we might think that he’s supposed to resist the temptations in all that excess – except that there’s such tactile pleasure in that excess, and such delight when Beyoncé heads for the pool and turns into a hip-hop Ester Williams, that this doesn’t exactly seem like a cautionary tale.

Many of the songs play like standalone videos loosely pulled into the storyline and connected by their celebration of African culture, and that’s fine: Faced with the skittering beat of “Find Your Way Back,” the dramatic staging of “Already” or the debutante ball riff in “Brown Skin Girl,” it makes a lot more sense to bask in the beauty and not worry about how it advances the story.

Beyoncé’s guests in all of this include her children, Blue Ivy and Sir Carter, as well as her Destiny’s Child bandmate Kelly Rowland, Pharrell Williams, Naomi Campbell and Lupita Nyong’o, among others who turn the film into a jubilant tribute to Black experience and Black art. And toward the end, the film shifts away from its rich flamboyance to picture ordinary families in normal homes, before easing into a lovely version of “Spirit” that begins a capella, with Beyoncé backed by a gospel choir.

The film is being released at a time when Disney is coming to terms with some of its own racist past by stripping its Splash Mountain ride of its ties to the offensive film “Song of the South,” and it’s the second high-profile Disney+ release this month to put Blacks and people of color at the center of the story. (“Hamilton” was the first.) “We were beautiful before they knew what beauty was,” Beyoncé says in a voiceover partway through “Black is King,” which is designed to make a case for those words.

She’s got another key line a little earlier in the film: “You can’t wear a crown with your head down.” “Black Is King” doesn’t exactly stand with the best of her previous work — it’s a pleasure but not a landmark — but the Queen Bey goes through it with her head up and her crown intact.