Netflix released two first look images from “Black Mirror” Season 4 on Thursday, further adding to speculation as to what the episodes will be about.

One image (above) shows the crew of the USS Callister, stars from the episode of the same name. More specifically, we get a full look at some of the costumes from it, which is clearly inspired by “Star Trek.” The women’s outfits are complete with gogo boots and large hair, so even the time period of the original series is in full force here. 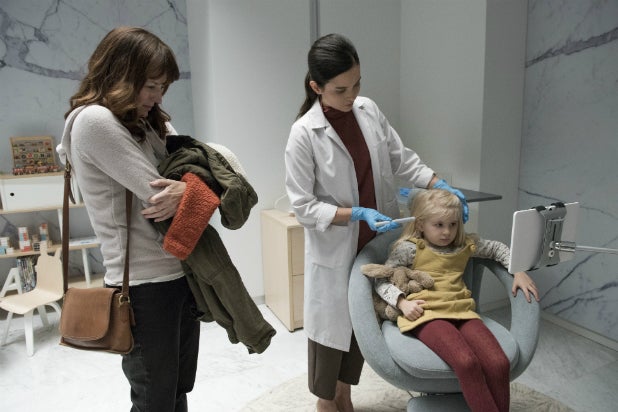 The second image comes from the Jodie Foster-directed episode “ArkAngel.” Less is known about this episode besides that it’s closer to an indie drama than any of the other installments this season. We speculated that it might have something to do with surveillance and while it’s still unclear what the theme will be, we do see a medical professional inserting a needle into a young girl’s head.

“Black Mirror” Season 4 doesn’t have a premiere date yet, but an insider told TheWrap that it’ll air sometime in 2017. The first teaser was released at the end of August.