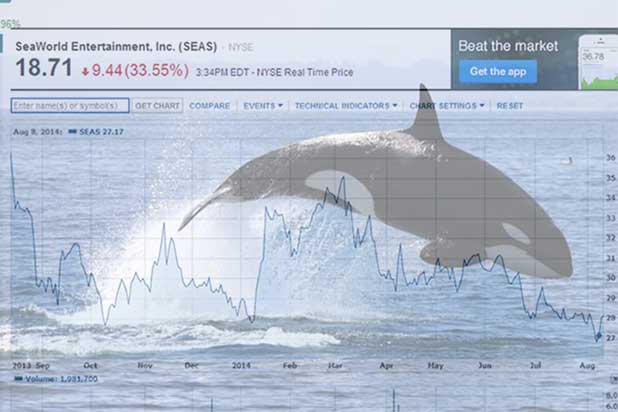 SeaWorld is still feeling the “Blackfish” effect as the company’s shares fell a whopping 22 percent over the past year, down 33 percent on Wednesday alone, when it reported lackluster second quarter earnings at the close of the regular trading day.

The director of Magnolia Pictures documentary “Blackfish,” which exposed the park’s practices of capturing and training killer whales, thinks the park’s falling revenue can only mean good things for her cause.

“I don’t think SeaWorld speaks the language of ethics, of right and wrong. But they do speak ‘Revenue,'” Gabriela Cowperthwaite told TheWrap. “This could spur meaningful, massive change on their part.”

Analysts expected the Orlando-based company  to report earnings of $0.59 per share; it settled for just $0.43.

Even though attendance at SeaWorld parks in the second quarter of 2014 was up 0.3 percent versus 2013’s second quarter year-over-year, its revenues of $405.2 million fell well below Wall Street analysts’ expectations of $445 million.

“We were pleased to report attendance growth in the quarter despite a challenging industry and competitive environment,” SeaWorld CEO Jim Atchison said in a statement. “The increase in attendance results from the shift in the timing of Easter and favorable weather, partially offset by lower attendance at our destination parks.”

“As much as we’re asked that, we can see no noticeable impact on our business,” Atchison responded to a question about the film’s effect on his company in a conference call with analysts earlier in the year.

Despite that, the film has sparked public protests, with various celebrities calling the park out on its practices and musical acts pulling out of performing at the park following the film’s release.

“Blackfish” has also sparked potential legal ramifications. Richard Bloom, the Assemblyman for California’s 50th district, and the chair of the Assembly Budget Subcommittee on Natural Resources and Transportation, has introduced a bill that would require organizations to cease the park’s orchestrated shows featuring marine life performing, and permit them only to keep killer whales captive for research, rescue, and rehabilitation purposes.

“I don’t care why they change,” Cowperthwaite says. “I just want them to change. Because obviously the rest of us have.”