This year’s Sundance Film Festival had an unexpectedly robust market, with four different films — including ones starring Mindy Kaling, Annette Bening and Jon Hamm — landing eight-figure deals. But the festival’s biggest sensation was “Blinded by the Light,” a joyous, touching and fact-based indie from “Bend It Like Beckham” director Gurinder Chadha that landed a $15 million deal from New Line.

The film doesn’t contain any stars (Rob Brydon, in a small but scene-stealing role, is the biggest name), and it follows a Pakistani British teen growing up in England in the economically depressed 1980s. The young man, Javed, dreams of becoming a writer but clashes with his conservative, tradition-bound father — and it’s not until he begins listening to the music of Bruce Springsteen that he finds his voice and makes a stand for himself.

The film is based on the upbringing of Sarfraz Manzoor, who wrote the 2007 memoir “Greetings From Bury Park” about his own years as a Muslim teenager obsessed with Bruce Springsteen and clashing with his traditional father. A touching indie film with glorious musical sequences and a heart-on-its-sleeve tribute to the power of music in general and Springsteen in particular, at its heart “Blinded by the Light” is the story of a father and son struggling to find common ground.

TheWrap caught up with Manzoor after he returned home to London from the festival that he described as “like a dream/out of body experience.”

Your first tweet from London said you were trying “to process What Just Happened.” How’s that going?
When something that massive happens, it’s really hard to actually sink in. it hasn’t yet.

I still find it hard to believe. There are no big stars in this film — it’s mostly unknown actors, it’s a British film set in a very unfashionable town. And yes, it’s about Springsteen, but the central character is a Pakistrani immigrant. For that to happen to this film out of all the films at Sundance is gobsmacking.

For example, the first Springsteen song I heard was “The River.” But it’s a slow song, and and I thought, “That wouldn’t be cinematic. Why not make it ‘Dancing in the Dark?'”

Basically, me, my dad, my family and my friend Roops are like they were really were, and everything else around that is fictionalized. But the film is emotionally biographical. Not everything really happened, although a lot of it did. But there is nothing in it that couldn’t have happened.

You know, the day before I went to Sundance, I went back to see the house I grew up in, and then I visited my father’s grave. For many people this would just be a story and a film, but for me it was actually my life. I really did grow up in a working-class background with a very, very limited idea of what my future would be. I had big ideas but no idea how they could come true.

And to stand outside the house where I listened to Springsteen, and stand at my father’s grave, and then two days later to see a thousand people respond to it at Sundance was really incredible.

What were your expectations going into the festival?
I thought the movie did justice to the book and to Springsteen, but I didn’t know if that was going to be enough. An audience at Sundance is not like a Springsteen concert. So when I went into the premiere, I was quite worried, and I was paying a lot of attention to the audience.

And they were quite quiet. I thought, “Oh, my God, they’re not getting the references, it’s too British, it’s not working.” And then I thought, “Well, just to have made the film is a success. Even if they don’t like it, we’ve done fine and that’s enough.”

And then they seemed to respond more as the movie went on, but it was a complete and utter shock to see the standing ovation at the end. I had no idea that that was how much people were liking it. 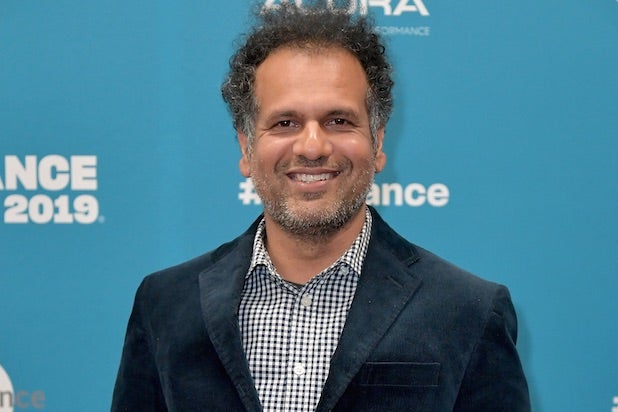 And at that point you already knew that Springsteen himself liked it, because Gurinder had shown it to him in New York prior to Sundance.
Yes. When we stared on the film, we basically knew that if Bruce didn’t like it, we didn’t have a film. We were trying to please him, trying to do a film that would honor his music and his ideas.

And because I’m very very familiar with Springsteen’s music and his words and his ideals, there were lots of lines in the film — that final speech, for example – embedded in the movie. I think he appreciated that we knew what we doing, and that our intentions were good.

And he was already a fan of the book.
I think he read it in 2010. When “The Promise” documentary came out in London, I went to an event, and he was there and he came up to me out of everyone in the crowd and said, “Your book is really beautiful.” I had no idea he had even read it.

What was the most surreal moment for you in Park City?
I think it was at the after-party after our premiere. A woman came up to me and told me that she loved the film. She as chatting to me like somebody who was really keen on it, and she said, “I’m gonna buy your film!” I thought, “Maybe that’s just what people say in this business.”

But it turned out that she was the head of New Line Cinema, and she did buy it.

So what do you want for the film from here?
I really wanted to make a film that was going to appeal to a lot of people — not just for Springsteen fans, and not for the art-house crowd. I wanted a crowd-pleaser, and I’m hoping it can be that.

And also, some people who’ll watch it have never spent two hours with a Pakistani family, and I hope it humanizes a community that is often dismissed as the other, and shows that the dreams and aspirations that they can have are not any different that any other family has. It’s a grand idea to think that the film can heal some divisions, but even a little bit would be really rewarding.

15 Biggest Box Office Hits That Premiered at Sundance, From 'The Blair Witch Project' to 'Get Out' (Photos)

Films like ”Precious,“ ”Little Miss Sunshine“ and ”Napoleon Dynamite“ all made noise in Park City before hitting the box office

Sundance is the biggest market for indie films around, and for good reason. The festival has a history of finding the quirky, independent crowd-pleaser that goes on to be a box office smash. 2020 saw a record sale of $17.5 million for the Andy Samberg comedy "Palm Springs," which proved to be one of Hulu's biggest movies ever. And while some films fizzle at the box office despite their festival hype, many more manage to sustain that buzz all the way until Oscar season. Here are a few that made a splash at both Park City and for wide audiences. All box office figures are domestic numbers.