Mark Hoppus, one of the founding members of the iconic band Blink-182, has revealed that he is battling cancer. The singer and bassist announced the news on Wednesday, posting a brief statement to his Twitter.

Hoppus didn't get into specifics on his diagnosis, beyond noting that he's been undergoing chemotherapy treatments for three months now. That said, he remained optimistic about his future.

"It sucks and I'm scared, and at the same time I'm blessed with incredible doctors and family and friends to get me through this," Hoppus wrote. "I still have months of treatment ahead of me but I'm trying to remain hopeful and positive. Can't wait to be cancer free and see you all at a concert in the near future." 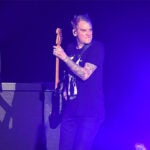 Hoppus also posted a photo of himself to his Instagram story in which he was hooked up to an IV. “Yes hello. One cancer treatment, please,” he captioned it.

Upon sharing the news, Hoppus received an outpouring of support and well wishes, including from fellow bandmate Tom DeLonge, who noted that he had been in the know about Hoppus's diagnosis "for awhile now."

"And to add to his own words that he used today, I would also like to say that he is strong, and a super-human who is pushing through this difficult obstacle with a wide-open heart," DeLonge wrote on Twitter, along with the hashtag #WeHaveHisBack.

Blink-182 drummer Travis Barker also voiced his support, telling E! News, "Mark is my brother and I love and support him. I will be with him every step of the way on stage and off and can't wait for us to play together again soon."

Barker also posted a photo to his Instagram story of him and Hoppus, captioning it with a simple "Love you" alongside a black heart emoji.