Fascination with Malcolm X and Muhammad Ali’s complex friendship got a boost from pop culture over the last year or so: Theirs was a central relationship in Regina King’s debut feature “One Night In Miami,” and it was also highlighted in the EPIX series “The Godfather of Harlem,” starring Forest Whitaker. As interesting as these portrayals are, truth is often more compelling than fiction, which is exactly what Netflix’s provocative documentary “Blood Brothers: Malcolm X & Muhammad Ali” illustrates.

The film is driven by the book “Blood Brothers: The Fatal Friendship Between Muhammad Ali and Malcolm X” from Purdue professor Randy Roberts and Georgia Tech’s Johnny Smith, both of whom are consistent presences throughout the documentary. Directed by Marcus A. Clarke (“Around the Way”) and produced by “black-ish” creator Kenya Barris (who, not too long ago, surprised the industry by dissolving his lucrative deal with Netflix), “Blood Brothers” brilliantly outlines the historical context in which these two powerhouses emerged.

The documentary avoids the trope of presenting these men as exceptions to their time who rose above their circumstances. In contrast, each was very much a product of Jim Crow America, molded by the racism that marked their childhoods in Omaha, Milwaukee, and Lansing, Mich. for Malcolm Little, and Louisville for Cassius Clay. 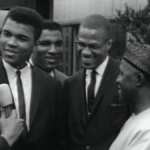 White supremacy, in the form of the Black Legion, literally killed Malcolm’s father Earl Little. As a follower of Marcus Garvey — the early 20th-century leader originally from Jamaica who led a mass movement, Pan African in scope and vision, emphasizing Black pride and self-sufficiency — Malcolm’s father actively stood up against racial injustice, losing his life as a result. Here Malcolm and Ali’s greatness lies not in their individual gifts but instead in their courageous decisions to use those gifts to challenge the white supremacy that marked not just their individual lives but that of the entire Negro race, as it was then termed.

That harsh racial reality is the magnet that draws each to Elijah Muhammad and the Nation of Islam. As an elder (nearly 20 years Muhammad Ali’s senior), Malcolm X served as a big brother to young Cassius Clay, helping to guide his early journey to heightened racial consciousness and activism. He did not, as “Blood Brothers” makes clear, sow the seeds of activism in Ali. The champion boxer’s eldest child Maryum Ali credits the brutal hate killing of Emmett Till, who was just a year older than her father, for that. Malcolm X’s third daughter Ilyasah Shabazz is also on hand to shed both personal and professional insight into her father’s life. 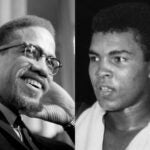 To tell this story completely and effectively, “Blood Brothers” looks closely to others tied to the men, like Ali’s brother Rahman Ali, who was physically present for much of his brother’s and Malcolm’s friendship. Journalist and author Herb Boyd, who knew Malcolm and has authored or edited several books on him, and A. Peter Bailey, a founding member of Malcolm’s Organization of Afro-American Unity, along with several others, provide credible and balanced eyewitness historical accounts.

Even well-known figures like Cornel West serve as more than talking heads, because West, 68, was roughly 12 when Malcolm was killed and grew up in the era of Muhammad Ali, as both a great boxer and an outspoken critic of American racism and the Vietnam War. His commentary, as well as that of USC professor Todd Boyd, who is close to 60, hits differently. 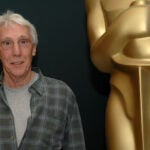 Also Read:
Leon Gast, Oscar-Winning Director of Muhammad Ali Doc ‘When We Were Kings,’ Dies at 85

Zaheer Ali, an expert on Black Muslims who has the distinction of studying Malcolm X extensively, provides greater historical context around the faith and movement of these two men. Conversations with Marcus Garvey’s son, Dr. Julius W. Garvey, as well as Melchisedek Supreme Shabazz-Allah, the Universal High Priest of the Nation of Islam, underscore the important role racial pride played in each of these men’s actions. Shabazz-Allah provides additional insight into the inner workings of the Nation, especially during Malcolm’s very public trials. Then there is the incredible archival footage tracking these men’s movements. Thanks to much of this footage, “Blood Brothers” powerfully illustrates the personal risks each man took in the service of freedom and equality for all Black people.

Truth, more so than anything, guides “Blood Brothers,” keeping it free of the hidden agendas and damaging speculation of other documentaries in this vein. The inclusion of Muhammad Ali’s damning comments, captured on film, regarding Malcolm after Elijah Muhammad cuts the leader off, provides a shocking illustration of this honesty — those words twist like a knife, but they’re part of the historical record. That dedication and commitment to uncovering and presenting the facts — good, bad, and ugly — surrounding the relationship between these two cultural icons puts “Blood Brothers” at the top of the class. Clarke and his collaborators have achieved a historical record in and of itself, documenting not just this compelling bond and friendship but also a crucial period in the Black freedom struggle that should serve as a valuable resource for years to come.