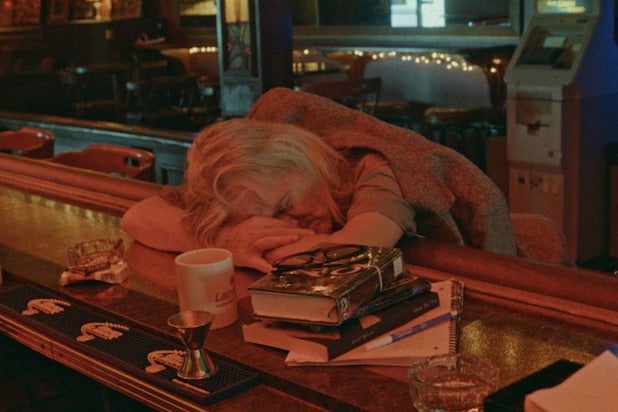 If there’s anything a viewer should take into the Ross brothers’ new film, “Bloody Nose, Empty Pockets,” it’s a healthy disregard for conventional definitions of film genres or styles. A carefully staged and meticulously cast presentation disguised as a cinema verité documentary, it’s confounding if you feel compelled to put a label on it but raucously moving if you take it as a day-long adventure with a group of fascinating characters.

It’s “The Iceman Cometh” transplanted to the outskirts of Las Vegas or “Cheers” on the wrong side of town, a fiction/nonfiction blend where verité meets improv and the whole thing is shot through with the skid-row romanticism of a Tom Waits song or a Charles Bukowski poem. And with the action set in late 2016 with that year’s presidential election playing out on TV in the background, it’s a sad portrait of America at the dawning of the Trump era.

Early in the film, a down-on-his-luck former actor named Michael tells a fellow drinker that when he started his career as an actor, he was going for the truth – but then he decided you could never really get there, so he tried for beauty instead. And if you’re not a stickler for the conventional definitions of truth and beauty, too, it’s safe to say that “Bloody Nose, Empty Pockets” finds a bit of both of those things.

The film premiered at the Sundance Film Festival in January, went to the Berlin and True/False Film Festivals and had a series of virtual screenings on July 8 to celebrate National Dive Bar Day, with a virtual rollout scheduled for July 10. The three festivals alone were enough to qualify for the Oscars in the Best Documentary Feature category, where the Academy has recently shown itself willing to accept heavily fictionalized films like “Rolling Thunder Revue” and “Kate Plays Christine.”

“Bloody Nose” was inspired more than a decade ago when Bill and Turner Ross would drive through Las Vegas and find themselves fascinated not by the casinos or the Strip, but by the city’s outskirts, which Bill Ross called “the realest part of the fake city.” They decided to find a bar, populate it with characters and let the cameras roll – but it turned out that a bar outside New Orleans, the Roaring 20s, served their purposes and their budget, so they used that and then brought in people they’d met in other bars, mostly in New Orleans, for what is billed as the Roaring 20s’ last night in business.

Still, the film is set in Las Vegas; occasional glimpses of the city’s streets suggest as much, as does Buck Owens singing “Big in Vegas” as the movie begins. As they did in their previous films “45365,” “Tchopitoulas” and “Western,” the Ross brothers dropped real people in constructed situations and used nonfiction techniques to tell a story that was more controlled than it might appear. (Their last film, the vibrant “Contemporary Color,” was based more around a David Byrne stage presentation, so it has a different feeling.)

What matters isn’t the setup, but the people. “I pride myself on not actually becoming an alcoholic until I was already a failure,” says Michael, the aging actor who’s asleep at the bar when the movie begins just before 11 a.m. “I ruined my life sober and then I came to you.”

The casting sheet must have called for grizzled, because Michael is soon joined by an assortment of “locals” whose faces map the mileage they’ve covered. They’re initially presided over by a bearded, kindly bartender named Marc, who picks up a guitar to sing an occasional song, then complains about the changing face of Vegas. “This place is losing its character,” he says. “F—ing Celine Dion can have it.”

Outside the door is just glare. Inside, with Patsy Cline, Michael Jackson and Kool and the Gang on the jukebox, is an odd kind of home. More people filter in, Marc leaves and a single mother named Shay takes his place behind the bar; two cameras weave between the patrons and capture snippets of arguments, flirtations, philosophical discussions and drunken boasts.

It doesn’t feel aimless, exactly, but it definitely meanders in a kind of sad, boozy reverie. Vegas casinos may be designed to make their customers lose track of time, but dive bars do the same thing with less effort.

By the time it gets dark, the bar is crowded and things get sloppier and more morose – and so, in a way, does the movie. One woman whines about how the younger generation never worked hard like her generation did, and a few minutes later pulls up her shirt to display her “60-year-old titties.”

In the background, the television set plays “Jeopardy!” and old movies and election coverage, with Donald Trump’s name every so often slipping into the consciousness of these people on the fringes. It’s a class portrait, perhaps, of a forgotten class that gathers around the karaoke machine to tackle John Prine’s anthem to losers, “In Spite of Ourselves,” and then straight into the Spice Girls’ “Wannabe.”

In the wee hours, they bring out a cake that says “THIS PLACE SUCKED ANYWAY,” and then spill out into the parking lot with sparklers to give the joint an inebriated sendoff. But there are no grand climaxes in “Bloody Nose, Empty Pockets,” which stands back and lets these lives (or these simulations of lives) go by, catching and preserving moments on the fly.

So the crowd thins out, Percy Sledge sings his ghostly version of “Come Softly to Me” on the jukebox, somebody tries to pick a fight and the movie becomes a sad, grungy fantasia. It ends in regret and anger and confusion, but it’s perversely beautiful.

And maybe truthful, too.