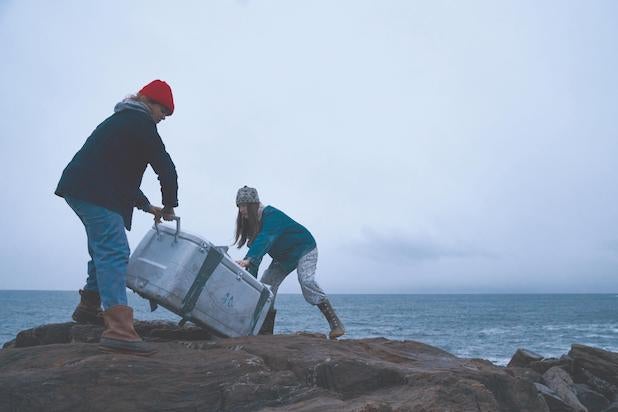 It’s undoubtedly unfair to compare any and all quirky, darkly comic crime stories to past Coen brothers films, but sometimes its inescapable. So yes, directors Bridget Savage Cole and Danielle Krudy’s “Blow the Man Down” has a blend you might as well call Coen-esque: dark deeds and black humor in a scenic but quietly sinister locale, with some bloody and seriously twisted stuff thrown in for good measure.

But “Blow the Man Down” also has enough freshness to survive the comparison. Partly, that’s because this is a female-centric tale of nefarious dealings and violence, with men peripheral to the machinations of the wives, mothers and daughters who run the show in a remote coastal Maine town while their men are out fishing.

Partly, it’s because the likes of Margo Martindale, June Squibb and Annette O’Toole get juicy roles and know what to do with them.

And partly, it’s because Cole and Krudy let us know right off the bat that they have a different take on this genre: The first few minutes of the film are devoted to a group of hearty fishermen singing the sea shanty that gives the film its title — and they sing it lustily and in its entirety.

Other shanties return at various points in the movie, with the robust tones of bearded men in flannel shirts providing a kind of Greek chorus to the noir tale as it unfolds. And here’s the thing: You might think of the sea shanty as a clichéd, easily mocked piece of music — all that “yo-ho, yo-ho” stuff, you know — but in the right hands and the right setting, these are beautiful, richly evocative songs that provide far more emotional resonance than you’d expect.

What goes on between the songs, meanwhile, is dark but subtle; there are moments of violence pushed to the point of humor, but for the most part, “Blow the Man Down” ratchets up the tension slowly and gets darker and weirder a little bit at a time.

It centers on two sisters, played by Morgan Saylor and Sophie Lowe, who realize after the death of their mother that she’s left them with a failing business and no way to pay the overdue rent. Lowe plays the good girl, Priscilla, who wants to stick around and save the family home; Saylor is the restless one, Mary Beth, who’d rather cut bait and get out of town.

One night, things go wrong for Mary Beth – and as in any good noir, missteps have a way of escalating. A trio of their mother’s friends, played by Squibb, O’Toole and Harceline Hugot, try to help out, while the tensions rise between those three and the town madame, played by Martindale with scary relish.

Everybody has secrets, nobody is innocent and the fun lies in watching it all play out in a subtle noir where the dames run the show and there’s nary a hard-boiled Bogart-type to be found. From “Body Heat” to “Fargo,” women have driven the action in noir films before — but the way this one plays out, with AARP-age women holding all the cards in a setting we usually associate with rugged men, feels like a genuinely fresh take on a time-honored genre. And the ending, all cagey glances and serene indifference hiding some seriously twisted stuff, is downright delicious.

Still, the men are good for something in “Blow the Man Down” — because, after all, you’ve gotta have somebody singing those sea shanties.