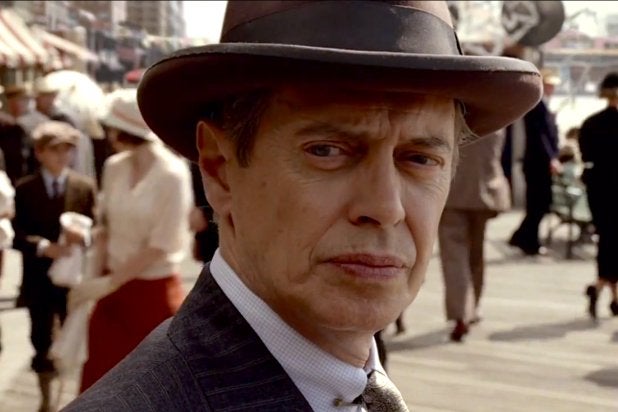 (Spoiler alert: Do not read on if you have not yet watched the series finale of HBO’s “Boardwalk Empire” entitled “Eldorado.”)

A lofty and ambitious show created by “The Sopranos” writer and executive producer Terence Winter, “Boardwalk” never lived up to its predecessor in hype or consistency.

While “The Sopranos” went out on top — ushering in the era of the split-by-a-year final season that AMC embraced for both “Breaking Bad” and “Mad Men” — “Boardwalk Empire” went out with more of a whimper.

After four seasons of 12 episodes each, the show only eked out an eight-episode order from HBO to wrap up its storylines and say goodbye to Steve Buscemi‘s would-be crime boss Nucky Thompson. It certainly delivered on the last part, though, unlike “The Sopranos” finale’s abrupt cut to black, which is still controversial after seven years.

In a twist almost everyone saw coming, Nucky’s apprentice Joe Harper (Travis Tope) was revealed to actually be Tommy Darmody, son of Jimmy Darmody, the former protege Nucky killed back in Season 2. Tommy gunned down Nucky on his beloved boardwalk, as we cut to a flashback of young Nucky swimming in the ocean.

Allison Keene of Collider found a lot to love about the series finale. While she found it problematic, as the whole series was for her, she nevertheless feels that it “earned its right to be missed.”

The focus on Nucky has occasionally been problematic (and boring), but the show also suffered when it shifted too far away from him. “Eldorado” wanted to make clear that the entire series has had meaning through the lens of Darmodys, who really defined Nucky (as not being a good person at all, not matter how much he wanted to be).  And yet, when considering the show as a whole, I’m not completely sure that’s earned.

Vulture’s Craig D. Lindsey thought the finale for the “hit-or-miss” series was perhaps a bit heavy-handed, noting that it “carried such an air of morose, melancholic finality, even most of the characters acted as though each moment was their last.”

As much as it glammed up the gangster life, these sinners heavily paid the price for their misdeeds, while the people who had at least some sense of what’s right and wrong (Margaret being a prime example of that) went on to live another day. This season alone was all about these complicated bad guys — Chalky, Van Alden, Capone, Nucky — paying for their badness, in one way or another.

The A.V. Club’s Genevieve Valentine wrote that the final season has felt like a long wake for the series, “as accounts are settled and those interested in last-minute redemption attempt it.”

It wasn’t always a smooth road; many of the series’ women petered out after strong introductions, sidelined or ground under the story wheels, and this season in particular has often felt as if loose threads were getting caught in the breeze thanks to a time jump, a shortened season order, and the flashbacks that never quite paid their rent. But perhaps it’s best to leave a show with things left unsaid. The grief of life is inevitable; some of it can wait.

Sean T. Collins of Rolling Stone found the finale very entertaining, noting that “fans of artfully bloody gangland violence and sumptuously set-dressed, bespoke-suited criminality had much to savor here, as they always have with this show.”

More than any other finished series in television’s New Golden Age, “Boardwalk Empire” used its series finale to strip its antihero protagonist bare. Whether or not he was ever fully comfortable inhabiting the role, Nucky Thompson was a crime lord. The show’s final sequence depicted his first, and worst, crime.

Entertainment Weekly’s Sarene Leeds thought it was “a predictable finale, but a rather poetic one too.”

Like Nucky Thompson, “Boardwalk Empire” always had trouble fitting in. Despite an impressive Emmy haul for its first season (including a win for executive producer Martin Scorsese, who directed the pilot), the series never seemed to find its footing. There were the regular comparisons to “Breaking Bad” and “Mad Men,” and ultimately, regardless of Steve Buscemi‘s stellar acting work, Nucky just didn’t meet the criteria to gain access to the Don Draper and Walter White-populated Club Antihero.