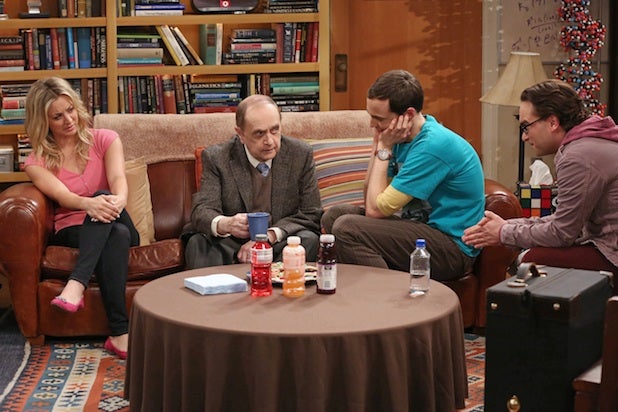 More than 50 years into a television career that has won him a Peabody Award, the Kennedy Center’s Mark Twain Award for American Humor and a spot in the TV Academy’s Hall of Fame, Bob Newhart has won his first Emmy Award.

Newhart was named Outstanding Guest Actor in a Comedy Series at the Creative Arts Primetime Emmy Awards on Sunday evening for his performance in “The Big Bang Theory” as a scientist who isn’t taken seriously because he appears on television.

The win came on only his seventh nomination; shockingly, he was never even nominated for “The Bob Newhart Show,” his classic sitcom that ran for six seasons between 1972 and 1978.

“I just got tired of being passed over, so I didn’t submit myself anymore, so I didn’t have to go through the agony of defeat,” Newhart told TheWrap of that show. “And I could say to myself, ‘I would have won if I put my name in.’

“What I do doesn’t get awards. Being a standup comic, people see it as just Bob being Bob. You don’t give an award to Bob for being Bob.”

Over the years, Newhart was nominated for his 1961-62 variety series, also called “The Bob Newhart Show”; for his ’80s sitcom “Newhart”; for his serious guest role on “ER”; and for the TV movie “The Librarian: Curse of the Judas Chalice.”

He told TheWrap that he plans to return to “The Big Bang Theory” next season.