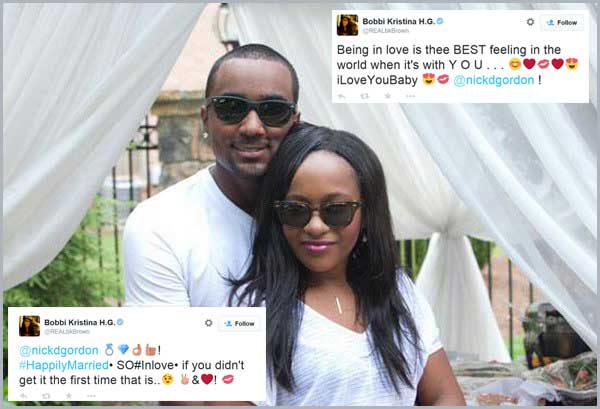 Bobbi Kristina Brown’s relationship with live-in boyfriend has always been a source of curiosity for an interested public, and a source of tension for her famous family.

As the daughter of Bobby Brown and Whitney Houston fights for her life in an Atlanta hospital, Gordon continues to plead for permission to see “the one he loves.” But many wonder — what exactly is the nature of this loving relationship? The two have repeatedly said they are married across social media. However, there is little evidence to support their claims.

For insight into why Brown and Gordon may have possibly fabricated this “marriage,” TheWrap spoke with a mental health expert and an addiction and intervention specialist.

Love in the Digital Age
It has been widely reported that Houston raised Gordon as her son, caring for him once his biological mother became unable to support him. After Whitney’s death in February 2012, tabloid reports began to surface saying Gordon and Brown were much more than near-relatives and described him as her “brother-boyfriend.”

The pair may have used social media to paint the relationship as normal, and thus silence the controversy.

“In her own way, in a very superficial way, it legitimized her relationship with this young man — because of the scandal around him being more of a brother. To her family, even though they weren’t blood relatives, it was incestuous. [The social media] took away some of the taint. It was a rationalizing,” said Jeffrey Gardere, Ph.D., assistant professor and course director at Touro College of Osteopathic Medicine.

Bobbi Kristina ignored the criticism and on Jan. 9, 2014, announced on Instagram that she and Gordon were husband and wife.

But in the days following the Jan. 31 bathtub incident that left Bobbi Kristina on life support, her father’s lawyer, Christopher Brown, shattered the portrait that the two had projected of a happily married young couple by saying they never wed.

The unexpected revelation led many to wonder why Brown and Gordon might have possibly created the façade of a marriage.

“It’s almost a proverbial cry for help,” said Gardere about the couple’s social media posts. “When you put so much out there as she has, it certainly could be projecting an image that wasn’t there, but one that she wanted to create.”

Fantasy vs. Reality
Substance abuse could also be a contributing factor to Bobbi Kristina’s social media “marriage,” given widespread reports of her alleged drug abuse and news stories saying she may have been using heroin just before the bathtub incident.

“People who struggle with addiction, they tend to live in a world of fantasy,” said Eric Paskin, founder and director of Potential LLC, an intervention and addiction services network with locations in New York and Florida. “If they don’t like their reality, they make one of their own. That’s often why they turn to substances in the first place, to alter their reality,” Paskin added.

A Case of History Repeating Itself?

It’s no secret that Bobbi Kristina’s parents had drug and marital problems.

Paskin explained a childhood like the celebrity offspring’s can not only activate a hereditary predisposition to addiction, but also create a need to cope with her parents’ dependency problems.

“Anytime somebody has struggled with a family member’s addiction — especially a public figure — they have to find ways and means to cope with that type of visibility. It adds a level of stress and anxiety that most people don’t suffer,” said Paskin.

These factors may have contributed to Bobbi Kristina tweeting about being in a happier union than her parents experienced.

Self-worth Over Selfies
Perhaps Bobbi Kristina isn’t any different from other troubled young people who turn to the Internet as a tool to bolster their self-esteem. While such behavior might seem normal to outsiders, experts say it’s a sign of deeper problems.

“People who struggle with a great lack of self esteem, or zero self esteem, often use social media for praise. It’s ‘Look at me!'” Paskin said. “A lot of times people will latch on to that to  gain some type of acceptance. They’ll do anything, including posing as being married.”