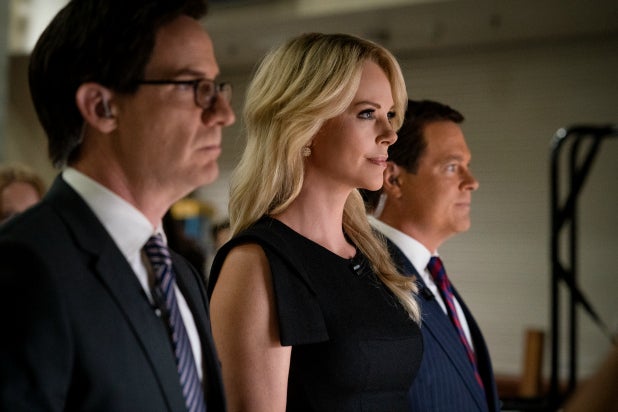 The working title for “Bombshell” was “Fair and Balanced,” and it still feels as though that would be the better option. Jay Roach’s compelling but uneven takedown of former Fox News and Fox Television Stations czar Roger Ailes is less a fiery expression of political outrage than a work of entertainment aiming to be all things to all people.

The movie is introduced as “a dramatization inspired by actual events,” a blend of freely imagined fiction and carefully recreated reality.

The first hint that there will be liberties comes when erstwhile Fox News host Megyn Kelly (Charlize Theron, who also co-produced) opens the film as our fourth-wall-breaking tour guide. Strutting through Fox headquarters in a patriotic stretch dress, she shows us the offices where the Murdoch family holds court. We visit cramped cubicles in which Sean Hannity (Spencer Garrett), Geraldo Rivera (Tony Plana) and Greta Van Susteren (Anne Ramsay) denounce “fake news.” And we glimpse the feared second floor, where Roger Ailes (John Lithgow) looms behind a prison-style security system.

Many of his employees are ready to break out of their cells; others are more inclined to play warden. Roach (“Trumbo”) and screenwriter Charles Randolph (“The Big Short”) follow the paths of several Fox News faithful, starting with the first Republican presidential debate in 2015. As soon as Kelly asks candidate Donald Trump about his troubling history with women, he goes into full attack mode. While she and her staff (Rob Delaney, Liv Hewson, Brigette Lundy-Paine) deal with a year of fallout, word hits the newsroom that former “Fox & Friends” host Gretchen Carlson (Nicole Kidman) is suing Ailes for sexual harassment.

Some of the staff are outraged, with Jeanine Pirro (a spectacular Alanna Ubach) leading the search for loyalists. Newcomer Kayla (Margot Robbie), however, is  not surprised. She’s an assistant to Bill O’Reilly (Kevin Dorff), but she arrived at Fox News hoping to go on air. When Ailes’ secretary Faye (Holland Taylor) notices her blond hair and miniskirt, she casually suggests that Kayla stop in to audition.

Though Faye knows about Roger’s casting couch, Kayla emerges from the “audition” shocked and terrified. But even Kelly is hesitant to admit that she too was once harassed by Ailes. And with Kimberly Guilfoyle (Bree Condon) demanding that everyone wear “Team Roger” shirts, what justice can Kayla ever find?

In the three years since Carlson’s lawsuit, we’ve experienced the Trump presidency, the Time’s Up and #MeToo movements, and a shifting media landscape. (Not to mention the romantic pairing of Guilfoyle and Donald Trump, Jr.) We’ve seen the fall of Ailes and O’Reilly and other establishment figures, even as Fox News continues to help shape the country’s fate.

In other words, this is one of the most timely stories anyone could tell at this moment in our history. That’s a pretty intimidating responsibility, and one that clearly weighs on the filmmakers’ shoulders.

Consequently, “Bombshell” is overpacked and unwieldy and often disconnected. There’s so much going on that no character gets the time she deserves. Not Kayla, a fictional construct meant to represent several of Ailes’ eventual accusers. Or Kelly and Carlson, whose longtime participation in the Fox News empire and ethos is conspicuously elided.

And what of all the first-rate actors whose presence is reduced to tantalizing cameos? Taylor does wonders with just a few lines and a raised eyebrow. But there’s not enough of Connie Britton, who is outstanding as Ailes’ unwavering wife. Or Kate McKinnon, whose fictional character — a liberal lesbian afraid of being outed as either — suggests so much unrealized potential.

Even so, “Bombshell” is likely to attain much of the Academy appreciation it seems to seek. Theron masters Kelly’s stern alto with remarkable success, transforming herself through steely conviction (and help from prosthetic makeup artist Kazu Hiro). She also elevates the actual Kelly, radiating Movie Star Charisma so blinding, it dims everyone else in her scenes.

Robbie is equally excellent, shading Kayla’s loss of innocence with subtle pain while once again showing off an impressively broad range. The scene in which Ailes first manipulates her is stunning in construction and performance: she’s confused, then humiliated, and finally heartbroken, as are we.

Hiro, an Oscar winner for “Darkest Hour,” deserves another nomination for the work he did on Lithgow. Alternately terrifying and pathetic, the actor deftly exploits Ailes’ intimidating physicality to reflect the rotted nature of his soul. (The actual Ailes died in 2017.)

Cinematographer Barry Ackroyd (“The Hurt Locker”) shifts his perspective with persistently dynamic energy, based on the thread he’s following. And costume designer Colleen Atwood gets it just right once again, with the women’s array of Fox-ified, short-bright-and-tight workwear.

Kidman, alas, fades into the background amid all the vivid venality. Megyn is the star, Kayla the ingenue, Roger the villain. Gretchen kicks the door open, and is then left standing in the cold without a clearly defined part to play. The real Carlson is as complex as Kelly and certainly no wallflower. But with so much else going on, she becomes an underwritten supporting role.

Although Showtime had mixed success with its recent Ailes docudrama “The Loudest Voice,” such a rich span of material and talent might have been better served by more space to unfold as a series. With so little time, the movie’s broad-ranging approach and tonal instability feel particularly scattershot. It also seems as though Roach and Randolph were overwhelmed by their ethical as well as artistic obligations.