Luca Guadagnino’s “Bones and All” feels like the movie he’s been working towards for his entire career. A beautiful, coming-of-age road movie that follows two lovestruck cannibals (played by Taylor Russell and Timothée Chalamet) who venture out on an odyssey across Reagan’s America. It combines the deeply felt emotional honesty of something like “Call Me By Your Name” with the Grand Guignol expressiveness of his “Suspiria” remake. What might be even more incredible than how snugly “Bones and All” fits into Guadagnino’s filmography is the fact that he almost didn’t do it at all.

“Well, when I read the book, I thought a lot about Luca because we had just had two relatively back-to-back collaborations on ‘A Bigger Splash’ and ‘Suspiria.’ And Luca wasn’t available to take on another project at the time,” writer David Kajganich told TheWrap.

Instead, Kajganich developed the film with Antonio Campos, who directed Netflix’s “The Devil All the Time” and episodes of HBO’s “The Staircase.” “But then [Campos] dropped off and I sensed a little window with Luca. And so I just went right back to him and I said, ‘Please read the script. Please think about this because I do think this has something for you in it.’ And he agreed and we made the film,” Kajganich explained.

I asked if there was anything Kajganich said to get Guadagnino to sign on. “I think I said very little, as is a better choice with Luca,” Kajganich said. “I just sort of sent the script and sort of gently reminded him it was there and knew that if he read it, if he really understood who these characters were and what their conflicts were, that he would be intrigued and thank goodness he was.” 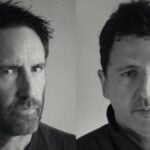 Also Read:
Trent Reznor and Atticus Ross on the ‘Endless Amount of Experimenting’ They Did to Write for Cannibal Lovers in ‘Bones and All’

When Guadagnino signed on, Kajganich’s job became much easier. “For me, the biggest challenge of the adaptation was trying to leave a channel open between the story and the audience that would be a place where there wouldn’t be judgment,” Kajganich said. “I think after watching the film a number of times, I just think the performances in the film, the way that Luca handled the film, I think it’s true. I think you don’t necessarily feel in the audience encouraged to judge these characters at all, so I’m really pleased that that’s how this played out. But doing that on the page without necessarily understanding how the performances would be pitched, how the direction would be pitched, it’s a little bit of an anxiety making proposition. But once it was clear that Luca was going to direct it, I was greatly reassured that all the little wiring I had built in the script, that was really about empathy and sort of not judging that those things would be honored in the production of the film.”

The performance that really connects the audience to “Bones and All” is Taylor Russell’s Maren, who discovers that she is a cannibal at the beginning of the movie and is grappling with her new identity throughout the rest of the film. (This movie is like if Jonathan Demme made “Near Dark.” It’s so full of life.) “I saw ‘Waves.’ I loved ‘Waves.’ I loved Kelvin Harrison Jr. I thought that Taylor was a revelation,” Guadagnino said about when Russell first came on his radar. Guadagnino continued: “Since then, I thought about her a lot and then I realized that she was the person I was looking forward to play with in doing Maren.”

Another thing that “Bones and All” and “Waves” share is an original score from Trent Reznor and Atticus Ross, who contribute an altogether different sound than you were probably expecting, both given their background and the fact that the movie is set in the 1980s. “I told Trent and Atticus, when we start talking, about the fact that I wanted it to be a very romantic movie and that I wanted to be very Americana. I thought that that could summarize itself into the usage of an acoustic guitar,” Guadagnino said. Going against type was what he was looking for. He said he doesn’t want to work with people and “ask them to do what they are famous for doing.” “I want to work with artists that can be really deep diving into whatever the actual journey we’re going through together presents itself with,” Guadagnino said. 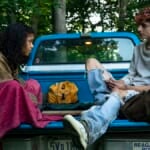 Besides Reznor and Ross’ haunting score, the soundtrack is peppered with hits by Joy Division and New Order (“Your Silent Face” accompanies a lovely montage). And these immortal bands are actually connected to the credits’ font and the other typographic elements in the movie (like the oversized location cards). “All the graphic design in the movie has been created by this sublime artist named Peter Saville, who created in the past the album covers for New Order, Joy Division,” Guadagnino said. “We put a lot of thought into that.”

Given that “Bones and All” is the third collaboration between Guadagnino and Kajganich, I wondered how the writer and director’s relationship has evolved and changed over the course of the movies.

“Well, these films take the audience and therefore us, the people who collaborate on them, to such extreme places and also profound places really,” Kajganich said. And while they might involve cannibals and witches and Ralph Fiennes dancing poorly, Kajganich said that the conversations that he has with Guadagnino “run very deep, very quickly.” The result is “an enduring friendship between us.” And it sounds like this is just the beginning. “Every time we nail down one of these really difficult, tonally difficult films and that we pulled it off, we want to do it again but maybe even go a little further or a little further into a space that is less and less prescribed and more and more improvised somehow. And so I don’t know what we’ll do next, but I’m sure it’s not going to be easier than this because we’ll worry about easy when we’re dead,” Kajganich said. “This is our time to actually do some pretty interesting work if we can.”

Guadagnino said that “Challengers,” his tennis world romantic comedy with Zendaya, will be his next film and when I tried to bring up his long-rumored “Scarface” remake, he expertly dodged the question.

I’d read in an interview earlier this year that Guadagnino is obsessed with John Carpenter and I wondered if he took any inspiration from Carpenter for “Bones and All,” especially since Carpenter never made a cannibal movie and it seems unlikely anyone was inspired by “Vampires.” “Well, I guess, certainly, unconsciously, I must have,” Guadagnino demurred. “There is a great scene in ‘They Live’ where the two lead characters fight a very long fist fight on a back alley. Somehow, now that I think about it, the idea of people on the margin of society trying to overcome that impossibility, it could be kind of that I thought about it without thinking about it. You know what I mean?” Yes, yes we do Luca.

“Bones and All” is now playing in theaters. 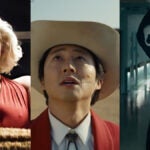