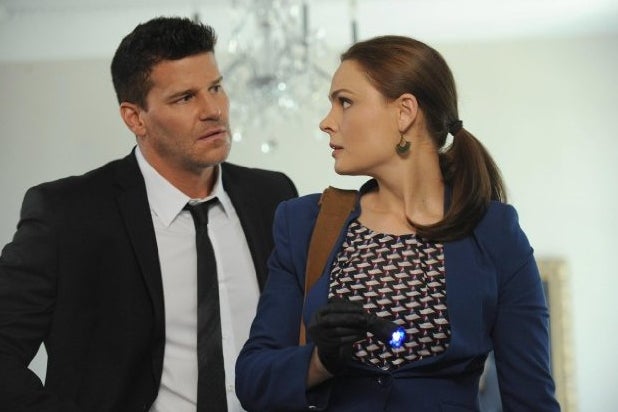 The new season of the Fox “crimedy” dusts itself off Monday night at 8 p.m. ET. Soon, it will be business as usual. The relationships, however, will not.

Just one problem: Booth is forced to turn down Brennan without explanation due to a plot twist involving a serial killer. That is not going to help the emotionally fragile Brennan.

As a result, season 9 sees a very distant relationship between the two, Executive Producer Stephen Nathan tells TheWrap. But it also sees a wedding “sooner than later,” Nathan promised — so don’t fret too much.

“To make their wedding the finale would be anticlimactic,” Nathan said. “If we held it back anymore, I think [fans] would come at us with torches and pitchforks, because [that’s] not real.”

After all, “Bones” has made its bones (pun totally intended) by grasping onto as much of that realness as it can — you have to get it right when your show is based in science. Though as Nathan points out, the most important chemistry is between the two leads, which he’s happy to see pay off in season 9.

Still, no one thought a show with the phrases “forensic anthropology” and “forensic archaeology” in its logline would have lasted 9 seasons. Not Nathan, not Fox. The network originally wanted the show to be its next “24” and far darker than what “Bones” is today.

“I don’t think they understood initially how the characters could make jokes over dead bodies,” Nathan said.

Nathan doesn’t see an end in sight. Not to the jokes, the relationship, the series — and certainly not the dead bodies, even for the grand wedding episode.

“There’s never going to be a ‘Bones’ with no body,” he promised.