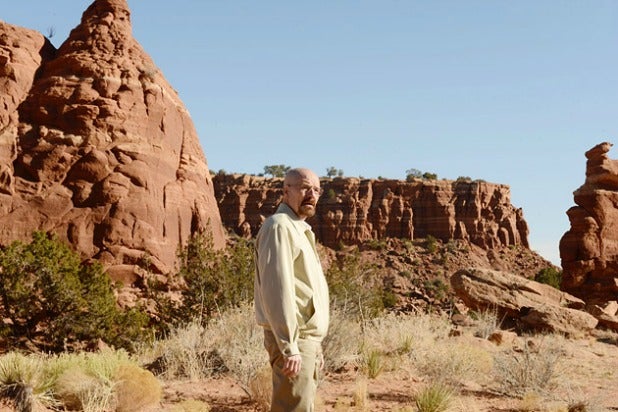 (Spoiler alert: Don’t watch this unless you’re caught up on “Breaking Bad”)

For their very last scene on the last day of shooting “Breaking Bad,” Bryan Cranston and Aaron Paul went back to where it all began.

Show creator Vince Gilligan and his team revealed on Monday’s “Breaking Bad Insider” podcast that the last sequence the show ever filmed was Sunday’s flashback to the first time Walt and Jesse cooked in a Winnebago in the New Mexico desert.

“The very final shooting day of 62 episodes of ‘Breaking Bad.’ The very last day. Yep,” said Gilligan. “It was perfect.”

The scene was heartbreaking for many reasons: It showed how things used to be between Jesse and Walt, and included Walt’s very first lie to Skyler about his new life. He also asked her if they could plan some “family time” — time Walt will probably never have again after Sunday’s resolution.

Also read: ‘Breaking Bad’ Shocker: How Vince Gilligan Warned Us It Was Coming

Rather than re-use any old footage from the cooking scene in the “Breaking Bad” pilot, director Rian Johnson had the crew recreate how Walt and Jesse looked in the first episode. Paul grew his hair out. Cranston shaved his goatee and wore a wig. The episode was written by Moira Walley-Beckett.

“I was there, and I’m so seldom on the set,” added Gilligan. “It was sad. It was bittersweet.  But I had the best day because I knew everything could not have been in better hands writing- and directing-wise. And I got to fart around and climb up all the rock formations I always… wanted to climb up on all the years I’d come out there. And I finally got to do it because I didn’t need to watch anything being shot. I knew it was in good hands.”

Sunday’s episode also contained at least two Easter eggs, the podcast revealed. As Walt pushes his $11 million barrel through the desert, he passes the pants he lost in that very first episode. Later, when Walt drops Holly at a fire station, the chess game in progress features a white king close to being checkmated. “Breaking Bad” fans have compared it to a chess game since at least Season 3, when Walt’s battle of wits with Gus Fring began.