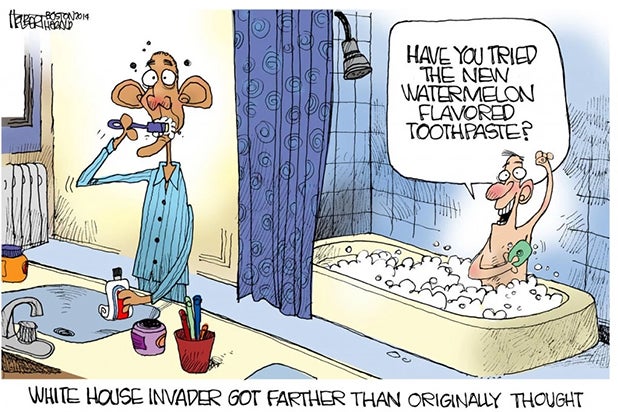 The Boston Herald and one of its cartoonists issued separate apologies Wednesday hours after the newspaper published a political strip in its print and online versions about President Barack Obama that drew widespread criticism.

The cartoon (pictured above) shows the President brushing his teeth while a White House intruder sits in a bathtub behind him and makes a comment about “watermelon toothpaste.” The cartoon’s caption read: “White House Invader Got Farther Than Originally Thought.”

But critics said it reinforced the stereotype that African-Americans are especially fond of the fruit. Among those speaking out — Gregory Lee Jr., former president of the National Association of Black Journalists, who called the cartoon “pretty darn racist” on Twitter.

After the outcry, cartoonist Jerry Holbert apologized on Boston Herald Radio and BostonHerald.com. “I want to apologize to anyone I offended who was hurt by the cartoon,” he said. “It was certainly, absolutely, not my intention.”

Holbert insisted the target of his comic strip was the inadequate security surrounding the President.

The Boston Herald also issued an apology. “His cartoon satirizing the U.S. Secret Service breach at the White House has offended some people and to them we apologize. His choice of imagery was absolutely not meant to be hurtful. We stand by Jerry, who is a veteran cartoonist with the utmost integrity,” the paper wrote on its website.

In syndicated versions of the comic they’ve replaced “watermelon” with “raspberry.”

Representatives from the White House did not immediately respond to TheWrap‘s request for comment.

Below are a few tweets critical of the cartoon:

Really? No one notice the racism in this Obama cartoon in the Boston Herald? Really? http://t.co/xb0OoliNia Everyone else did.

So the Herald is either trolling for relevance or just straight up racist. Wonder how edit approval for this went. http://t.co/K7EUeCN6d6

The Boston Herald's entire staff should be ashamed for allowing that cartoon to be published.