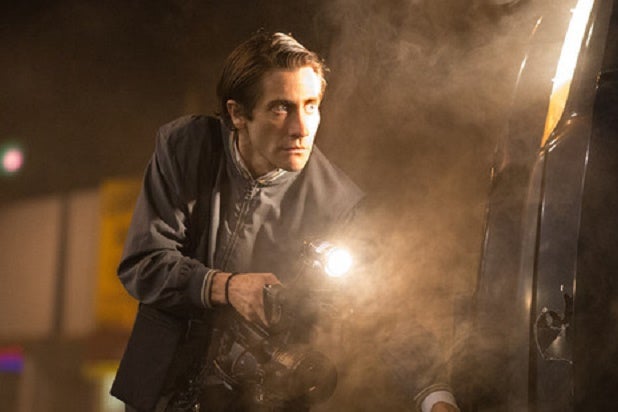 Days of the dead could describe the box office this weekend.

The Jake Gyllenhaal thriller “Nightcrawler,” a special re-release to mark the 10th anniversary of the horror classic “Saw” and the Nicole Kidman-Colin Firth thriller “Before I Go to Sleep” are all opening nationwide on Friday, but none is expected to crack $10 million.

That means last weekend’s leader, the teen-targeting horror film “Ouija,” is a good bet to top this weekend’s race. If Universal’s micro-budget creeper can keep a little over half of its nearly $20 million opening audience, it should repeat. If not, look for Open Road Films’ “Nightcrawler” to sneak in for the win.

“This is the calm before the storm,” said BoxOffice.com vice-president and senior analyst Phil Contrino. “We have the combination of Halloween falling on Friday and being just ahead of one of the biggest weekends of the year (“Interstellar and “Big Hero 6” open next week), so it’s not surprising things will be slow.”

The R-rated “Nightcrawler” features Gylenhaal as an ambulance-chasing news videographer. The movie is the directorial debut of Dan Gilroy, whose two brothers and wife Rene Russo made the film a family affair: Dan wrote and directed, Tony produced, John edited and Russo stars as an L.A. news director seduced by the high-risk footage that Bloom gathers. Bill Paxton and Rez Ahmed co-star.

It’s well-reviewed (87 percent “fresh” on Rotten Tomatoes) and solid on social media. It’s pacing ahead of Gylenhaal’s last wide release, “Prisoners,” on Twitter and is roughly even with it on Facebook. That one opened to $20 million in late September last year.

It was leading advance sales at online ticket broker Fandango on Wednesday morning and will be in roughly 2,766 theaters.

Watch video: Nicole Kidman Can’t Remember Who Tried to Kill Her in “Before I Go to Sleep” Trailer

“Before I Go To Sleep” is a British thriller starring Kidman as a woman who wakes up every day, remembering nothing as a result of a traumatic accident in her past. Firth plays her husband and Mark Strong co-stars.

It was produced by Ridley Scott and adapted from S.J. Watson’s novel by Rowan Jaffe, who also directs.

It’s at a so-so 53 percent on Rotten Tomatoes, and isn’t looking good on social media. It opened in September in the U.K. and has taken in $5.3 million so far. That’s about what it’s projected to gross in its U.S. debut this weekend.

Clarius Entertainment will have it about 1,700 theaters.

Also read: ‘Saw’ Returns to Theaters on Halloween in Honor of Tenth Anniversary

Lionsgate has reason to celebrate the 10th anniversary of “Saw.”

The R-rated scream-fest launched a seven-film franchise of low-budget horror films from Twisted Pictures that grossed more than $873 million between 2004 and 2010.

The plot revolves around Adam (Whannell) and Lawrence (Elwes), two men chained in a subterranean bathroom and given instructions via a recorder explaining how to escape.

The original opened to $18 million at Halloween in 2004. Lionsgate will have it in roughly 1,850 theaters on Friday and it should take in around $2 million, comparable to the haul of the “Ghostbusters” re-release in August.