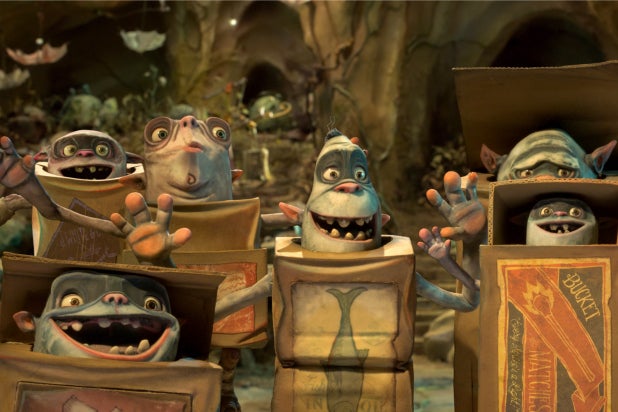 Even by the standards of kids’ movies about genocide and the frequent uselessness of fathers, “The Boxtrolls” isn’t very much fun at all. A surprisingly charmless and aimless movie from Laika Studios, the upstart stop-motion artists who previously crafted the wonderfully dark “Coraline” and “Paranorman,” this latest venture seems destined to disturb young viewers while thoroughly boring their parents.

Lacking appealing characters (or character design), this misfire will, with any luck, eventually become a forgotten footnote among the output of a production company that has, up until now, shown real promise at making films that defy the usual tropes and storytelling mechanisms in contemporary family-friendly animation.

Based loosely on the children’s book “Here Be Monsters!” by Alan Snow, “The Boxtrolls” takes place in Cheesebridge, where the news that the underground-dwelling Boxtrolls have stolen a child leads evil exterminator Archibald Snatcher (voiced by Ben Kingsley) to offer to kill all of the little creatures in exchange for being allowed to join the city’s elite White Hats. (That group’s leader, Lord Portley-Rind (Jared Harris), is far more concerned about the title characters getting their hands on his stocks of Gouda and Brie than he is about the welfare of the local citizenry.)

That child, as we come to learn, wasn’t stolen (for reasons explained well into the story), and he grows up among the kind and peaceful Boxtrolls, to whom he is known as Eggs (Isaac Hempstead Wright). (All the Boxtrolls bear names that match the labels on their boxes, so they’re called things like Fish and Shoe.) As Snatcher keeps sweeping up Boxtrolls and decimating their population, Eggs sneaks out in the daylight during the annual celebration day that has sprung up to mark the anniversary of his supposed abduction.

While the garish Madame Frou Frou sings an epic ballad about how the Boxtrolls kidnapped and then ate the child, Eggs comes face to face with Winnie (Elle Fanning), Lord Portley-Rind’s ignored daughter. (Her bossiness and self-determination cross over into being grating and obnoxious; I wanted an animated Lou Grant to pop out and tell her, “I hate spunk!”)

As Eggs and Winnie discover the true nature of Snatcher’s terrible scheme — one that, frankly, doesn’t even make much sense while the film is unspooling, let alone after some post-screening analysis — they must rally the kind, docile Boxtrolls to stand up for themselves and fight back.

Much like the underground Boxtroll kingdom, where humanity’s discarded bits and springs and junk get repurposed, the screenplay by Irena Brignuli and Adam Pava feels like a messy and awkward amalgamation of ideas and plots from previous, better movies. Apart from Fish (Dee Bradley Baker), who becomes Eggs’ surrogate father, the Boxtrolls are singularly lacking in personality or individuality. We don’t get to know them very well, we never find out what their relationship to humans (with one exception) was like prior to Snatcher’s reign of terror, and we certainly never find out how Eggs learns to speak like other humans.

There are some scattered laughs to be found, most of them involving Snatcher’s philosophical henchmen Mr. Pickles (Richard Ayoade) and Mr. Trout (Nick Frost), but they disappear for long stretches at a time. (There’s one particularly funny gag involving a rim-shot; in another movie, it would be but a passing amusement, but here it stands aloft like the Mount Olympus of Comedy.)

Worst of all, “The Boxtrolls” operates in a realm of ugliness; the little beasties aren’t interesting to look at, the humans are grotesque, and the sets lean toward the grimly industrial, the mechanical hodgepodge, or the blandly storybook-village approach. Nothing to see here, even with your 3D glasses on.